Ben Freedman presides over a spectacular retail store called Treasure Hunt Antiques & Collectibles. This fabulous storehouse of decades old consumer goods is piled high with vintage furniture, china and glassware, kitchenware, clocks and watches, jewelry and silver, scientific instruments, swords, military medals, magazines and vinyl records. Ben has more stuff then you have time to see, and lots of funky gadgets and collectible toys at the front entrance to lure curious people deeper into his lair. That’s just what happened to this author, cycling the area on a fine September afternoon, I came and saw and was conquered by the man’s charm and vast wealth of knowledge.

Treasure Hunt Antiques & Collectibles is located at 2897 Lake Shore Blvd W, which is just east of Islington Ave at Sixth Street in New Toronto.  There’s free parking right in front of the store, and designated parking spots in the rear for loading and unloading merchandise.  Any history buff or interior decorator could spend a day in here, or a week just perusing the minutia and mass of collectible merchandise.  The store is especially filled with equestrian themed antiques. 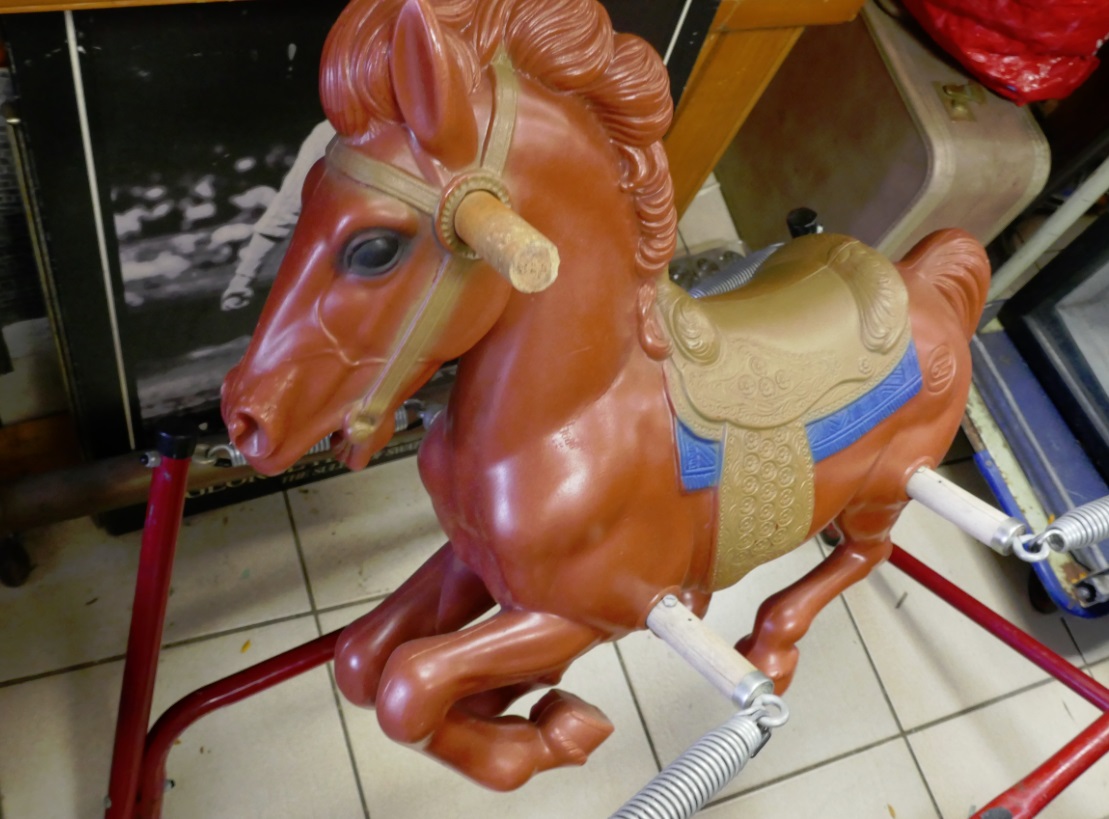 Above is the hobby horse that’s branded ‘Pony Express’, and this author watched as Mr Freedman dragged it out onto the sidewalk where it would surely capture the attention of young people passing the store. These kids would bother their parents to let them have a ride, and Mr. Friedman would suddenly have lots of time to show the adults other merchandise.  The Pony Express theme hobby-horse fascinates young people just as the 1860-61 history of the Pony Express, a failed east-west US mail service that existed for only 18 months just before the outbreak of the Civil War, still fascinates adults. The toy is a microcosm for our disappearing culture. A child riding this rig today probably wouldn’t know the difference between a horse and a pony, or even know that mail was once carried in saddlebags on horseback.

Evidence of a winning wager on Big Red’s last race at Woodbine sells for $100 today. 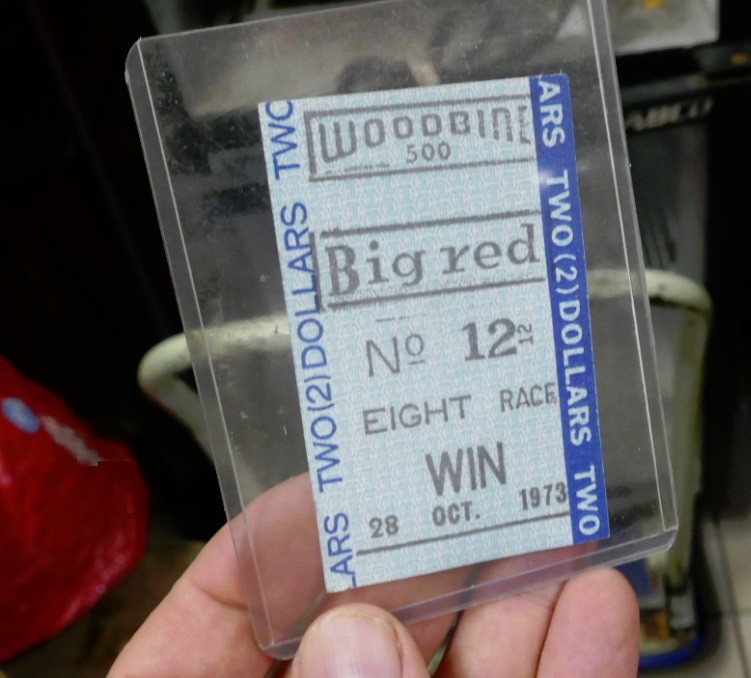 To the left is a winning $2 bet on No 12 horse in Race Eight from Woodbine Racetrack, dated 28 Oct 1973 which Ben tells me is a winning $2 bet on Secretariat. According to him that famous Canadian race horse was nicknamed ‘Big Red’ by the racing community.  This author looked it up –  and he’s right. Its a fact that on October 28, 1973, an incredible thoroughbred nicknamed “Big Red” did indeed run his last race, “…ending an awesome career in near darkness on a cold rainy afternoon at Woodbine.”  Secretariat, was only three years old at the time.  The horse who had captivated the imagination of the racing public in America for nearly two years won that race over ‘slick’ conditions on the Marshall Turf Course before a very large audience of 35,117 people. Woodbine Racetrack would be lucky to get half that attendance today, and that’s not because people have lost interest in gambling, but because today people don’t travel to the races to gamble on horses anymore. HorsePlayer Interactive came along twenty years ago, and today the next generation mobile app HPIBET is avail across Ontario and most of Canada.

And the equestrian collectibles didn’t stop there.  Ben had something else up his sleeve, literally, his own watch. 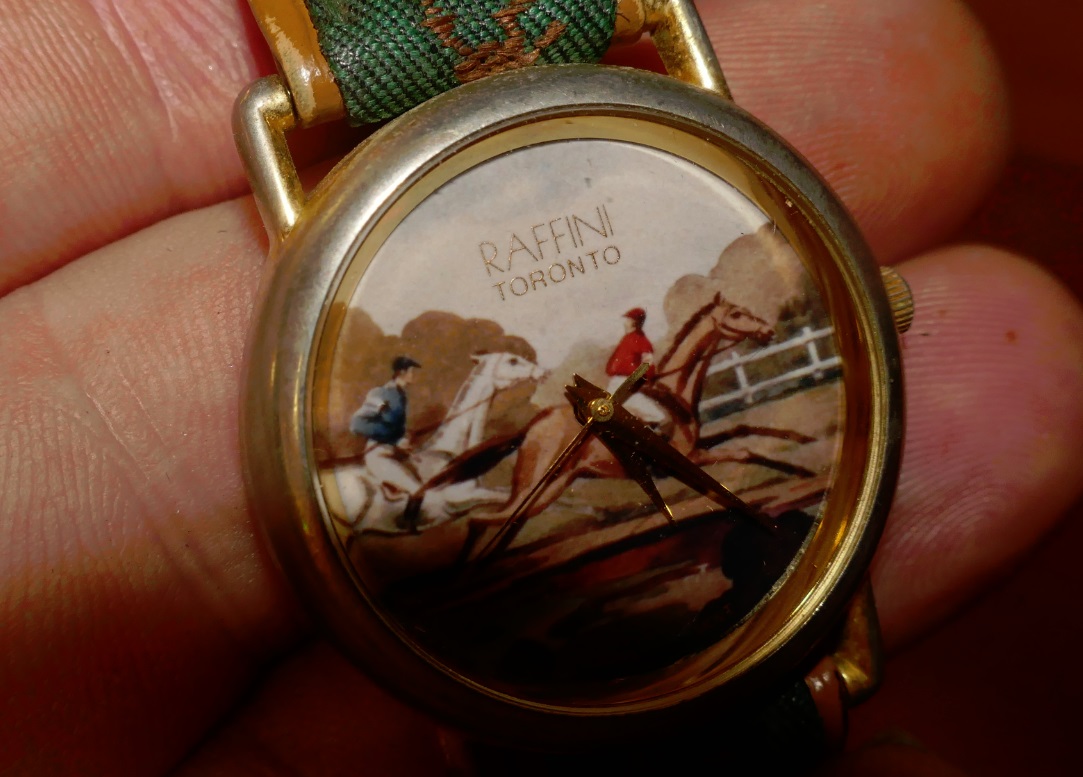 Horse racing news – Canadian Thoroughbred is in Ben Freedman’s blood, and when he was the proprietor of a busy men’s clothing store in the late nineteen sixties and early 1970s, he would frequently take friends and family to Woodbine Racetrack for an evening’s entertainment.  This watch, emblazoned Raffini has quite a story.

“My store was called Playboy Shop Men’s Fashions and was situated at Jane and Wilson. There was an
antique white 1952 Jaguar Mark V outside on a cement podium. It became a landmark. The store was started by my brother Jake, who was a brilliant multi-talented menswear icon (he designed made-to-measure hipster pants and suits) who at one time owned a chain of four men’s fashion stores (called Jake’s StyleLeaders in the 1950’s in downtown T.O.). Jake started Playboy Shop in the early 1960’s and I joined him full-time in 1972. I later became his partner and later renamed the store Raffini Men’s Fashions in the 1980’s. Raffini is a word I created from the Italian noun Raffinatezza, meaning Refinement. At one time I had two Raffini stores, one on Jane and the other on Front Street.” Ben Freedman 28 Sept 2017

In Ben’s long life he’s seen some incredible racehorses and horse races. He’s personally witnessed great races in which some of the most famous horses in Canadian history have run, including Northern Dancer. 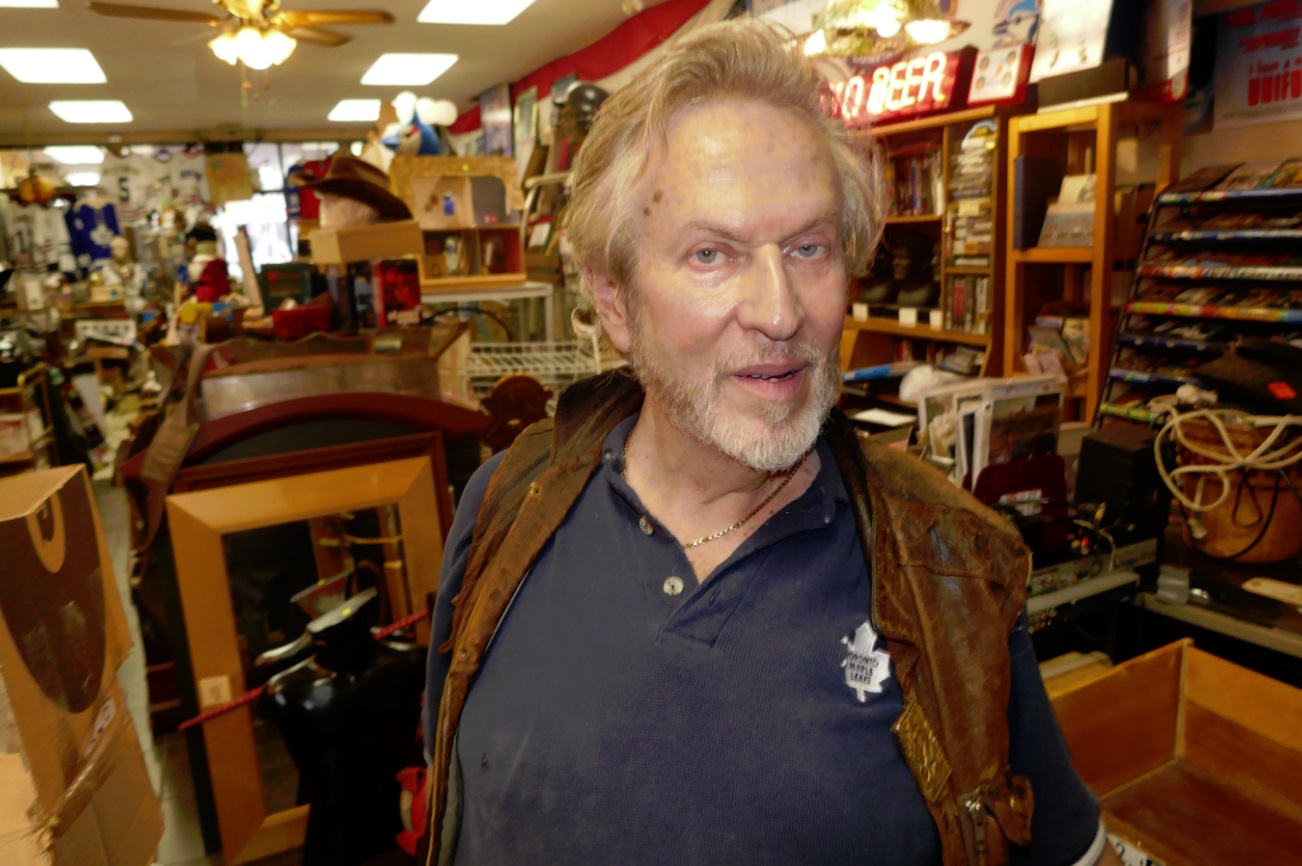 In truth, the store is hard to navigate because of its over-supply. There’s just so much stuff to see here that Ben is an essential tour guide.  He probably likes it that way, because he enjoys talking to people and telling stories. Unlike other (younger) antiques dealers, Ben has more than thirty years of his own personal collection in the store. Each item carries a story and that’s what makes them treasures.