English Rugby has come to Toronto and is growing a real following in Canada one game at a time.

History was made on Saturday May 6th 2017 when the Toronto Wolfpack took on the Oxford RLFC at home here in Canada, at Lamport Stadium on King St. West and won.  And the story of the game will certainly become fan myth because the home team defeated the invaders 62-12!

Despite the dark and unseasonably cold weather, there were over 6200 people in the stands, and although this is less than their target of 10,000 spectators, it was by all accounts a big victory for a fledgling rugby league in a foreign market that craves hockey, baseball, basketball and soccer in that order.

Even more encouraging, when the sun did emerge for a few minutes that afternoon, many of these fans could be seen sporting new Wolfpack gear they’d bought at the team store across the street from Lamport Stadium on Jefferson Ave. And while we’re discussing team spirit I should also mention the boisterous crew drinking Ontario craft beers in the north side of the park.  The team has its own beer in the Brazenhead Pub in the nearby Liberty Village mews. Here’s the Gilbert Balls popup store below. 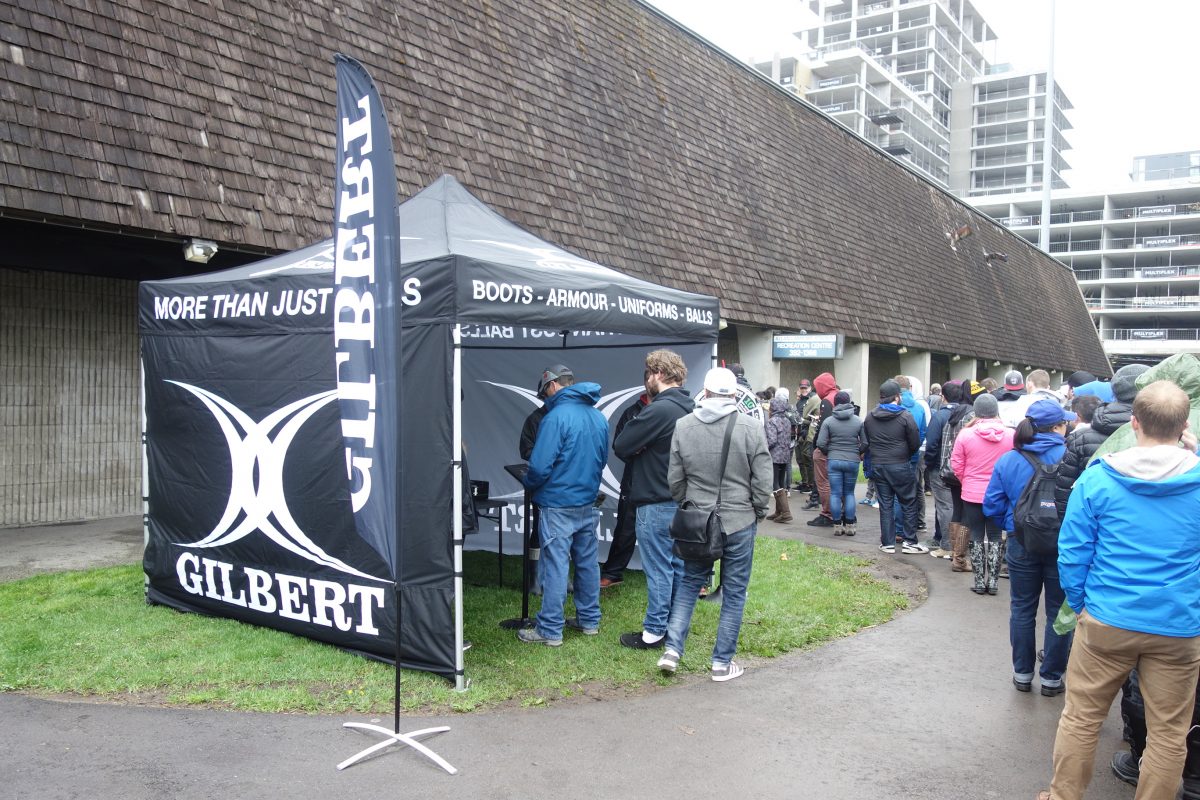 Outside the stadium, Gilbert Balls had setup a small tent with a crown & anchor style clacker wheel encouraging fans to spin for discounts on rugby balls, shoes and other rugby apparel. Gilbert Balls is the world leader in rugby related sporting goods and the official supplier to many teams all over the world. They’re the official suppliers of Rugby Canada which at this point is just one professional team – the Toronto Wolfpack. 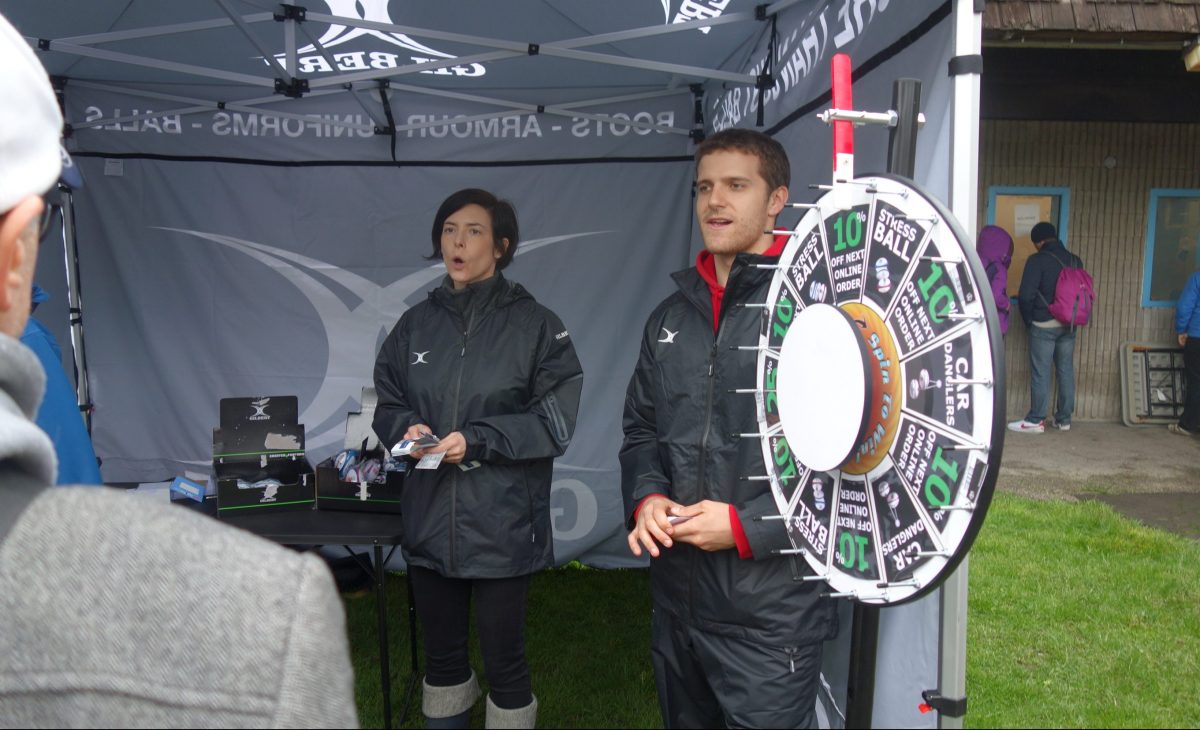 ‘Wolfpack’ is an apt name; the athletes on the Toronto team all scored early. Blake Wallace ran 30 yards for the game’s opening score two minutes after the opening whistle, at the start of the game. Andrew Dixon, Jonny Pownall, Richard Whiting, and Ryan Brierley also scored in the first 25 minutes. You can read profiles of some Wolfpack rugby players on Toronto Guardian.

Toronto Wolfpack has a big Twitter channel @TOwolfpack, or rather, they’re building one. 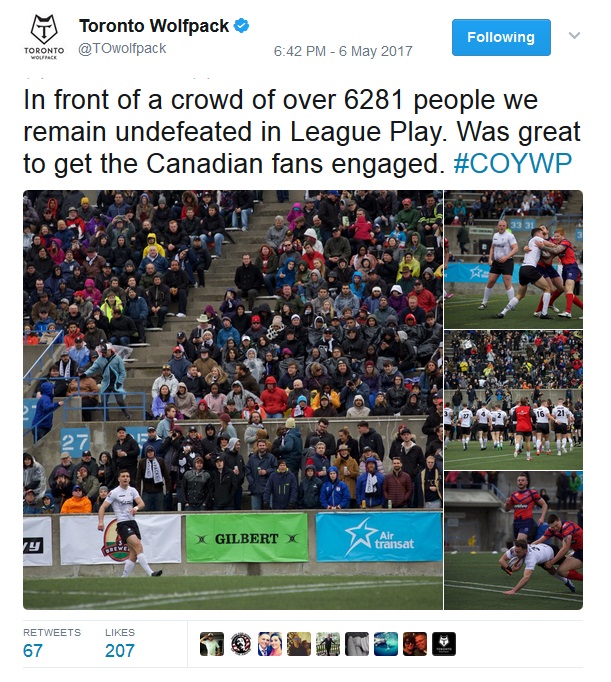 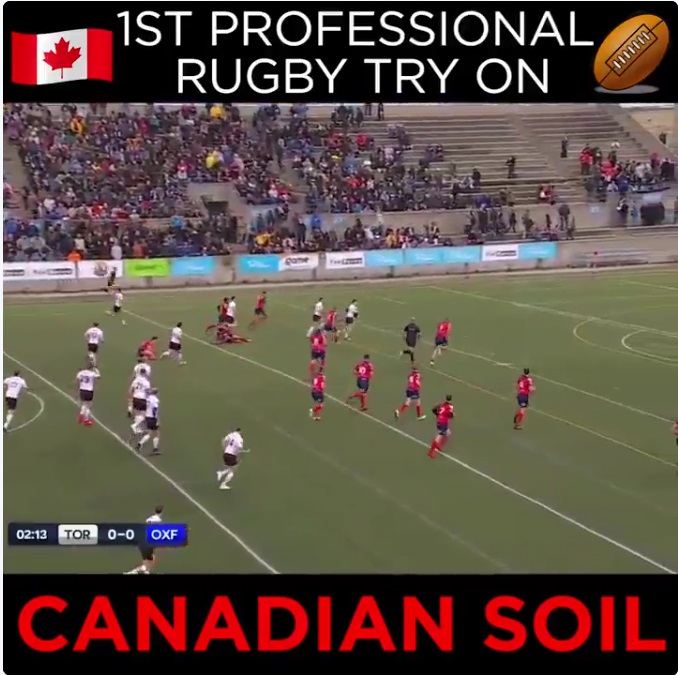 It appears the Oxford team has at least one hero – Casey Canterbury, a perfect name for any UK player and this guy seems especially talented to get his mates on the score board.

Wile rugby is not a particularly violent sport, minor skirmishes took place throughout this season opener. Late in the first half, Liam Kay threw a punch and got a ten-minute penalty. Then midway through the second half, Jake Emmitt reacted badly to the referee’s yellow card – he punched an Oxford player and evoked a bench-clearing brawl. He was thrown out of the game and two other players were ejected as well.

An International Rugby League? How Green is that?

Toronto Wolfpack might drink craft beer but has anyone calculated the carbon footprint of these players after just one season? And what about all the other teams that must now fly to Canada routinely as part of league play? There’s no mention of any carbon offsets or any counter measures for sustainability on their website either – just saying.

This is the view of league play on the field from twenty stories up in the condo building across the road.

The League sends their first big challenge to Toronto in two weeks time.

In two weeks time, the Toronto team hosts the Barrow Raiders a fully professional squad that has run up a series of one-sided wins.  Toronto Star reports that Oxford’s team on Saturday included “two construction workers, a teacher, and a PhD student in entomology”.  It seems they all got a free trip to Canada for the weekend and a chance to make history in the opener, but its clear they were not ready the Toronto squad of (more) professional athletes.  But the Barrow Raiders will be…

The series of one sided victories that the Toronto Wolfpack has been enjoying, again Toronto Star reports “Through six weeks of league competition, the Wolfpack has outscored opponents 372-49” is about to be seriously challenged by the Barrow Raiders game on Saturday the 20th of May 2017. 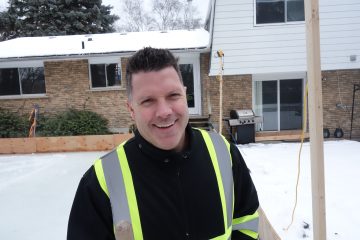