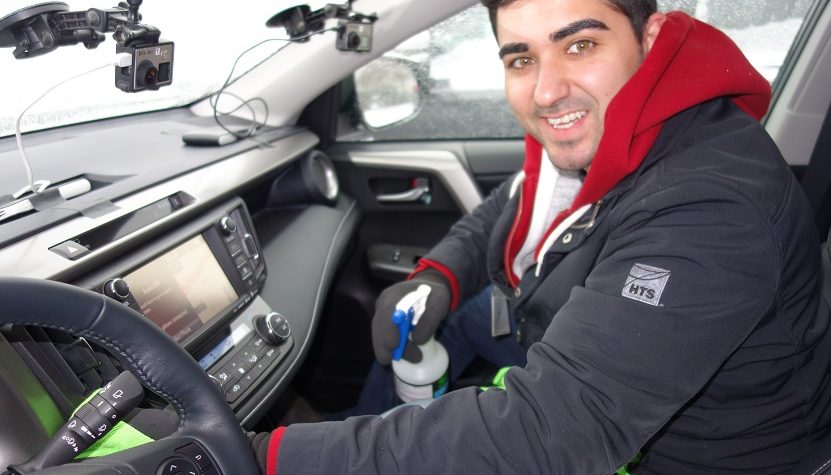 Two men have made a ‘Checkpoint Cruiser’ to drive through D.U.I. checkpoints and the new Cannabis Testing checkpoints here in the city and, while recording video, test whether or not law enforcement will violate Section Eight of the Canadian Charter of Rights and Freedoms.

The car has four video cameras and two different audio recording device ‘systems’, all saving data to a hard drive in the trunk. The cameras record interior and exterior angles. The objective is to document everything that happens at a roadside checkpoint.

What is the true purpose of the R.I.D.E. checkpoints? Is it to stop drunk driving? Or does it exist to help get Canadian acclimatized to another instrument of the Police State?  many experts believe the Ontario R.I.D.E. Program is an ineffectual deterrent to drunk driving and acts more like a census reporting tool that delivers a percentage-drunk score every season. The programs’ true objective is to force residents into a soft abeyance that will, if not vigorously opposed, become more and more aggressively imposed on the populace in the future. The freedoms that our ancestors fought for, and that we now enjoy, are slowly, one policy and roadside checkpoint program at a time, being eroded away – all this is done to keep YOU safe.

Police state tyranny is what the men who made the Checkpoint Cruiser believe is coming, and this author agrees that it’s a valid concern.  Most residents are understandably suspicious of the Toronto Police Service, and their penchant for profiling minorities and ‘carding’ youth, and their shameful reaction to cameras.

Section 8 of the charter provides everyone in Canada with protection against unreasonable search and seizure. This right provides Canadians with their primary source of constitutionally enforced privacy rights against unreasonable intrusion from the state. Typically, this protects personal information that can be obtained through searching someone in pat-down, entering someone’s property or surveillance.

Currently, the Criminal Code authorizes police officers to conduct a standard field sobriety test on a suspected impaired driver. If the officer has a reasonable belief that an offense has been committed, a specially trained officer can be called to conduct a drug recognition evaluation. But what lengths will they go to test for new drugs? What does the Supreme Court say about the rights of the individual being subjected to these invasive procedures? This author suspects there are some civic unknowns yet to tested.

Our Checkpoint Cruiser creators have asked me to keep their identity a secret, for now.  They haven’t even made a video yet, in part because the locations of police checkpoints are kept secret in Canada (not published in advance like in many States in the USA). But they’ve perfected their camera / laptop set-up. The car is a mobile audio video recording studio with a spotless interior.  Police will never be able to argue they spotted something suspicious and that was the reason for the search. This car is clean.

Justin Haybabeh from Autoscrubs auto detailing service in Pickering Ajax drove into the city to do the work ahead of the test video shoot for free; it was his contribution to the cause.

Why Make YouTube Videos? Are they doing it for fame? for money? or to bring awareness to the problem of a growing Police State?

The words ‘Reality Television’ used to apply to the shaky camera style elimination series TV shows like Survivor and Big Brother, but now with the more authentic reality viewers get on YouTube, well its caused the television genre to be relabeled as ‘RT Gameshow’ on most TV guide listing directories. Because its not reality.

Reality happens at a DUI Check Point when a citizen stands up for his or her rights and refuses to answer any questions other than the ONE the cops are allowed to ask  (which is ‘have you been drinking tonight?’ ). That shit is real.  This author has had Police ask him ‘Where you headed to?’,  and ‘Where you coming from?’ which they will say is done to keep drivers on their toes. Standing up for your rights by refusing to answer cops’ invasive questions is real, and makes a great video.

The internet and social media has made YouTube video stars with subscriber lists that dwarf cable television audience totals. Its also changing genres and combating the proliferation of ‘tyrannical’ police state policies.