I love Toronto. This city is home to a wide array of creative people and supports a rich, vibrant community of artists. With neighbourhoods like Greektown, The Gay Village, and Little India, the culture and lifestyle diversity is clear.  But also in the downtown Fashion District, Theatre District and in entertainment section along Richmond St we also see artistic diversity. Toronto truly embraces art with enthusiasm, and no where is this more evident than Graffiti Alley. 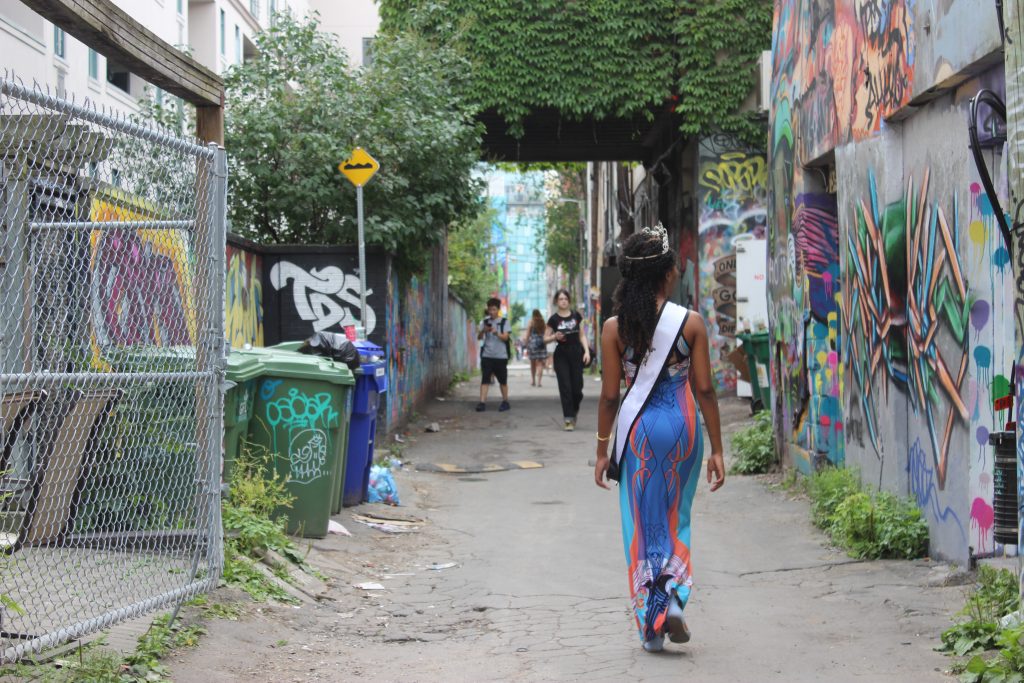 Now you’ve seen my sash and crown and colourful dress, and you’re probably wondering who I am? My name is Adanna Taylor, and I competed in the 2017 Miss Teenage Canada competition.  I was one of the finalists, but more importantly during the blogging portion of the competition I wrote about Graffiti Alley on my pageant blog and was invited to rewrite the piece here in more detail.

Spanning almost a kilometer between Queen and Richmond streets in the Fashion District, Graffiti Alley is a must-see for Toronto tourists. I stumbled upon this beautiful site while on a walk in the city last summer. I decided that it was the perfect place for a photo shoot.Soon after entering, you find yourself surrounded by vibrant, intricate pieces in every direction. 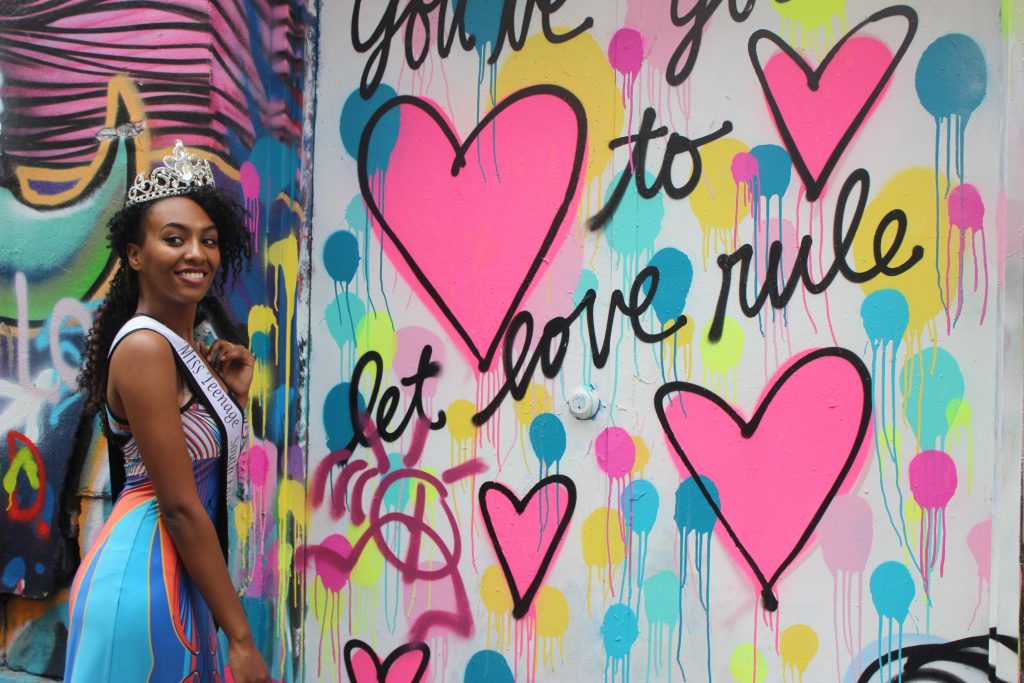 The alley is home to some exquisite and masterfully crafted artworks ranging from whimsical to political in their nature. Graffiti Alley was the first place where graffiti was made legal in Toronto. This is helping to remove the sigma that graffiti is just vandalism and shouldn’t be appreciated. Some graffiti is beautiful and carries important messages. Graffiti Alley gives artists a voice and they can now use this little piece of the city to express emotions, share messages, advertise and build businesses, and share their brilliance with anyone who’ll look. That being said, there were a few pieces that stuck with me.

Although it’s simple, this piece carries a lot of significance. The quote speaks volumes, especially when you keep the current social climate in mind. The artist wrote “You’ve got to let love rule” amongst a small field of hearts, a philosophy by which I think everyone should live. Created by self-proclaimed love based activist, Alyssa Rushton (@heart_ _bomb), the piece embodies the simplicity of happiness. We live in a world where we’re seeing a lot of hate and intolerance. I think that Alyssa, as an activist, created the piece as a small but powerful protest to this hate and to remind people of what was truly important in life. When you let love rule your life, good things come to you. I Although it likely didn’t take her long to complete, her art bears a message that viewers should carry for a lifetime. 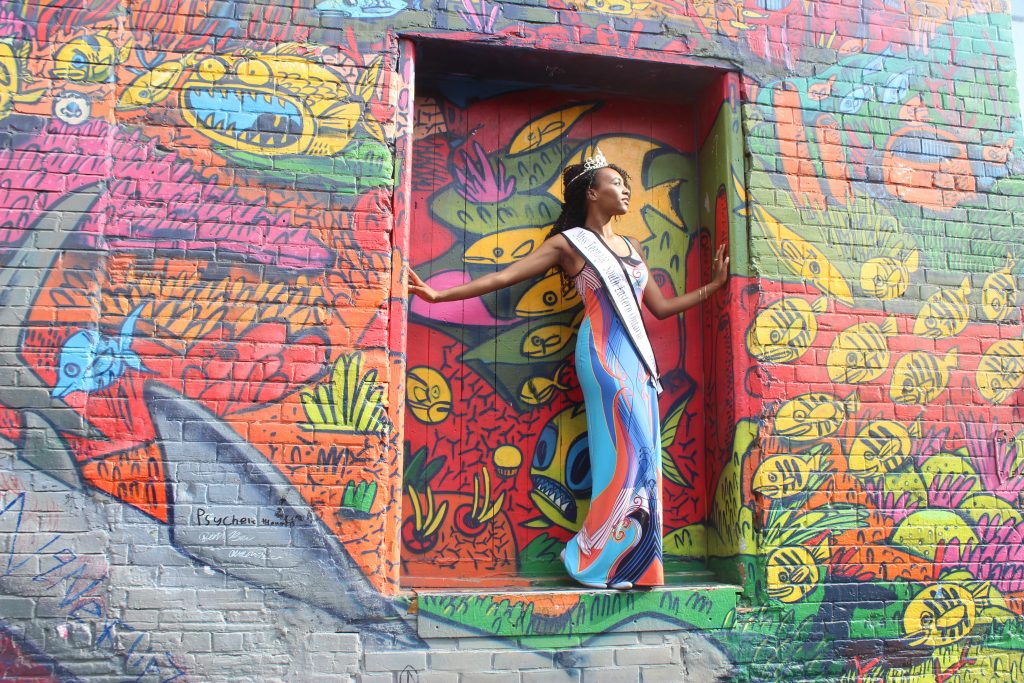 Uber5000’s musical fish covers two walls of the 3-storey Capra Properties Building, and is detailed beyond belief. It was painted by a professional named Uber 5000 (@uber5000), who is probably the most well-known graffiti artist in Toronto. And he’s not slowing down; Uber5000 was just featured again in the Toronto Star on Aug 7th 2017 on account of another new landmark mural in the area.

The building owners hire @Uber5000 to paint the mural in order to make their buildings stand out (and to keep other lower quality artists away). I must say that even among all the other graffiti in the area, Uber5000’s pieces certainly catch the eye. The piece I’m standing in above is a masterpiece that features a twenty foot tall octopus and thousands of fish in a whimsical underwater scene. The colours are stunning and compliment each other perfectly. The detail is well conceived and must of course have been planned in advance as it ties every aspect of the piece together, leaving no loose ends. It likely took months and thousands of dollars to finish and the product is outstanding because of the details. This is proof of an artist who truly loves his craft. Although Uber5000 was hired to paint it, it takes incredible talent and immense dedication to complete a project of this quality and magnitude.

Feminist Graffiti in the Alley = Girl Power in Toronto! 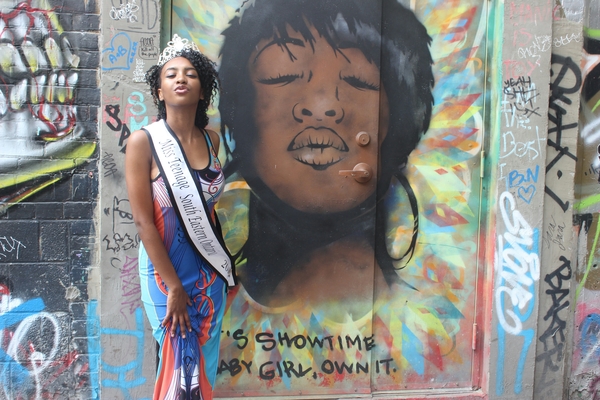 This piece by an unknown artist features a picture of a black woman with the words “It’s showtime baby girl, own it.” underneath. I like the uplifting nature of the quote and the simple but detailed portrait. The vibrant colours make the piece eye-catching and add emotion.  Upon further research, I found that the quote was a lyric from the song Waiting on It, by female rapper Rapsody (please be warned that the song does contain some explicit language). In the song, Rapsody talks about self-empowerment as well as empowering others. Another lyric in the song speaks of paving the way for other women who sought success in her male-dominated industry. I am a huge believer in using your own success to help others. The owners of the buildings in graffiti alley are actually a great example of this credo. Not only to they allow artists to tag their buildings, but some even pay the artists for their work allowing them to build success and continue their craft. I love how different artists now use the alley’s surfaces to spread positive messages. 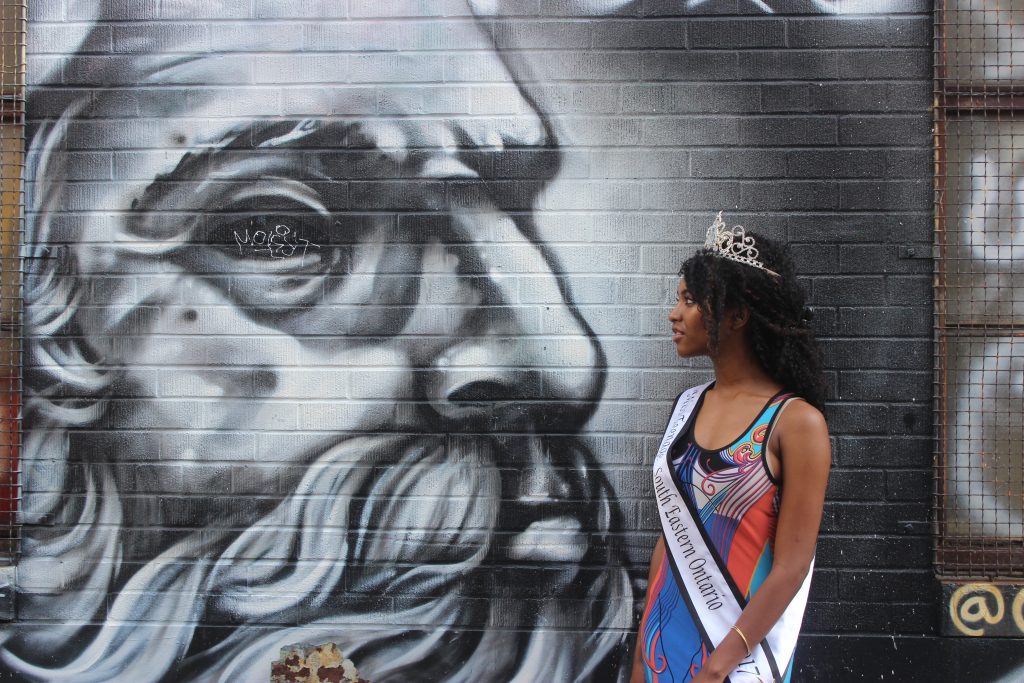 While some canvases display important messages, I like the piece above for its beauty and adept execution. Based on an excerpt from Michelangelo’s “The Creation of Adam”, the artist masterfully recreates the 15th century Florentine artist’s intricate artistic style.  The creator here in Toronto is an artist named Willy Wales (@crwales66), a Toronto based tattoo artist who also paints portraits. The shading and detail here are meticulous and what makes this artist even more talented is that his tattoos are executed with the same skill. 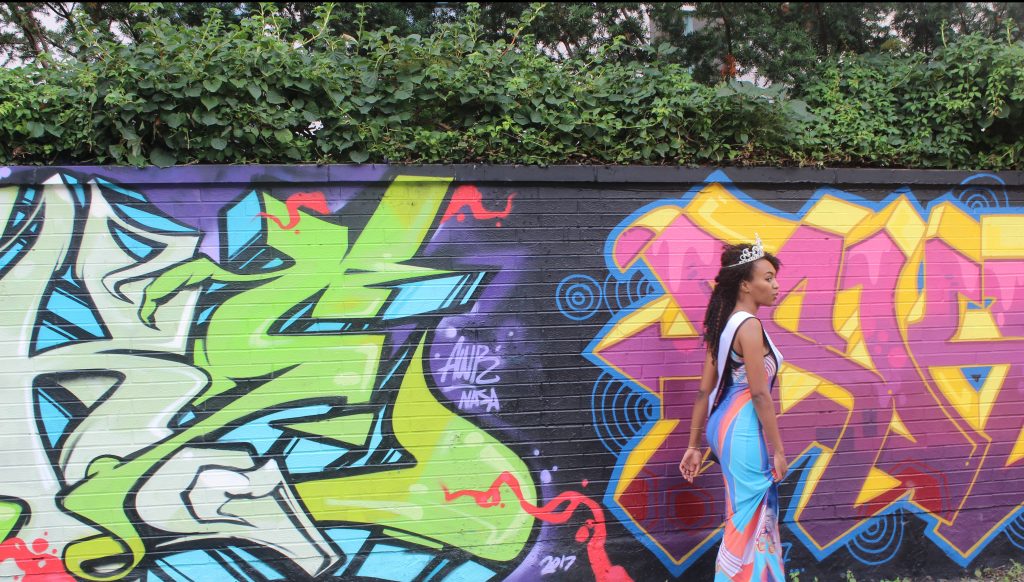 Everyone who lives in Toronto should take the time to explore Graffiti Alley and visitors should add it to their lists of sights to see in the city.  The journey offers an authentic look into the minds of Torontonians and the culture of the community. With no admission fees and its safe location, Graffiti Alley is incredibly accessible for anyone who wishes to see it. The Alley attracts many photographers on a daily basis and has acted as the background to the “Rant” segment of CBC’s Rick Mercer Report for many years giving the area true Canadian cultural significance. I love it because every time I go, I find more and more beautiful pieces of work and learn more about my favourite city in the world. 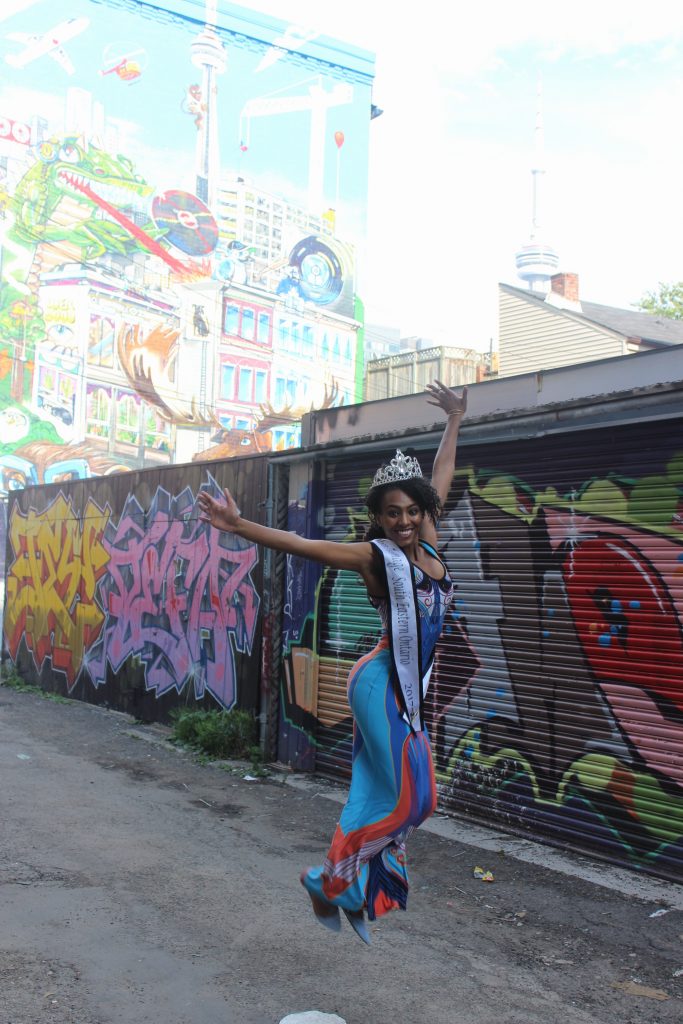 If you would like to explore Graffiti Alley, you can pay it a visit in real life or in an interactive tour on Instagram @graffitialley.to. Support the artists by visiting their Instagram pages and drop a rating on Trip Advisor showcasing your favourite pieces. Keep exploring! Adanna – Miss Teenage South Eastern Ontario 2017