Inside the 2017 Search for Miss World Canada

Sharing Toronto magazine got an inside look at what its like to be enrolled in a modern beauty pageant last week, from Sunday July 16th right up the 2017 Search for Miss World Canada‘s dramatic conclusion on Saturday the 22nd of July.  At approximately ten pm that evening a new titleholder was selected by a panel of nine judges and crowned by Michelle Weswaldi, the pageant director on stage. Congratulations Cynthia Menard, Miss World Canada 2017, and good luck in Beijing in September. 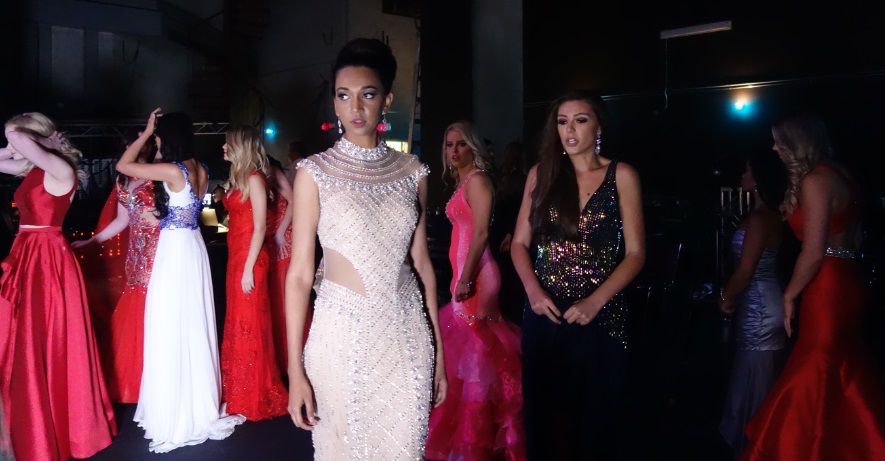 The annual Miss World beauty pageant, held in a different pageant crazed country each year, is watched the world over and impacts the beauty and fashion industries in ways you might never imagine.  The Miss World Canada website blog reads like a sophisticated lifestyle magazine as it reports on the events that happened during ‘Experience Week’ here in the city. Its all started on July 16th as fifty seven delegates gathered in Toronto from around the world. 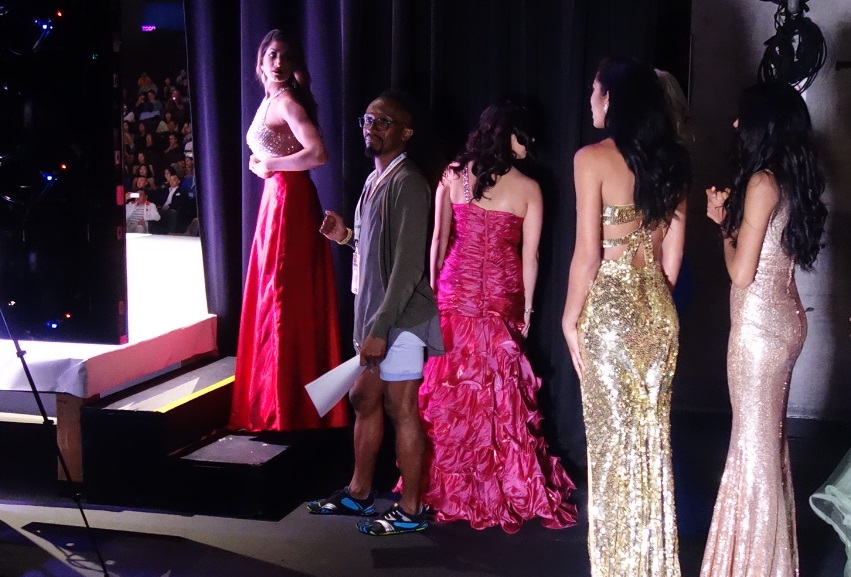 What happens in the days leading up to a beauty pageant?

Do want to go behind the scenes at a beauty pageant? All of the 2017 #MissWorldCanada Instagram media is collected by Hashtagio. They made a feed wall for the Sponsor Party, but their primary contribution is a page feed on the site that displays all #MissWorldCanada tagged images. 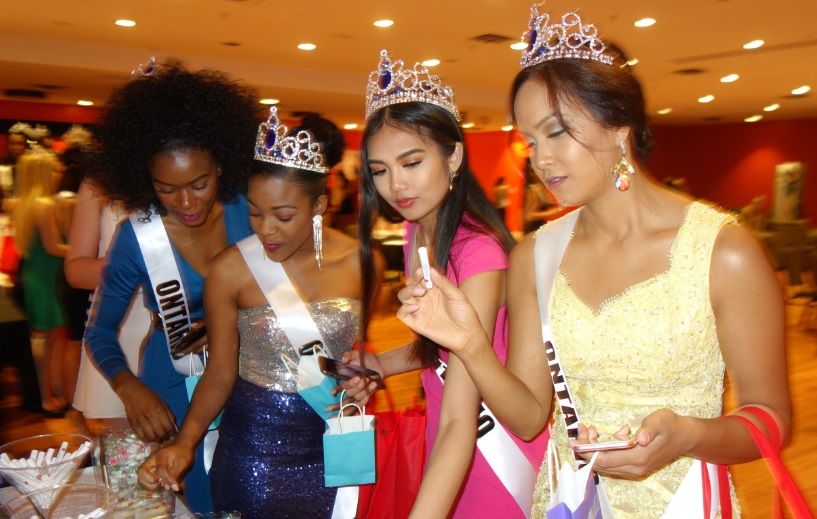 SUNDAY evening, the 2017 MWC Experience Week events started with the official Sponsor Party at the Edward Village Hotel in North York where business sponsors lined up along the walls in the grand ballroom to dispense a bounty of luxury gifts. The sponsors are mostly small to medium sized business entrepreneurs who do this to get traction and more influential Instagram followers and mass blog coverage. The pageant administrators have wisely decreed that writing about the official Sponsor Party with links is a mandatory 3rd blog assignment as each of the Delegates has a WordPress blog which is graded as part of their final score.

The sponsor party was chronicled on the Miss World Canada blog. This was an orientation event where the delegates met each other for the first time. Nobody knew anyone and some delegates literally arrived at the hotel in the middle of the proceedings. The party is therefore necessary for many reasons and makes a great backdrop for networking.

Below is Lily Liao from Streetchic ca with Robin Cimitruk of Raven Social. 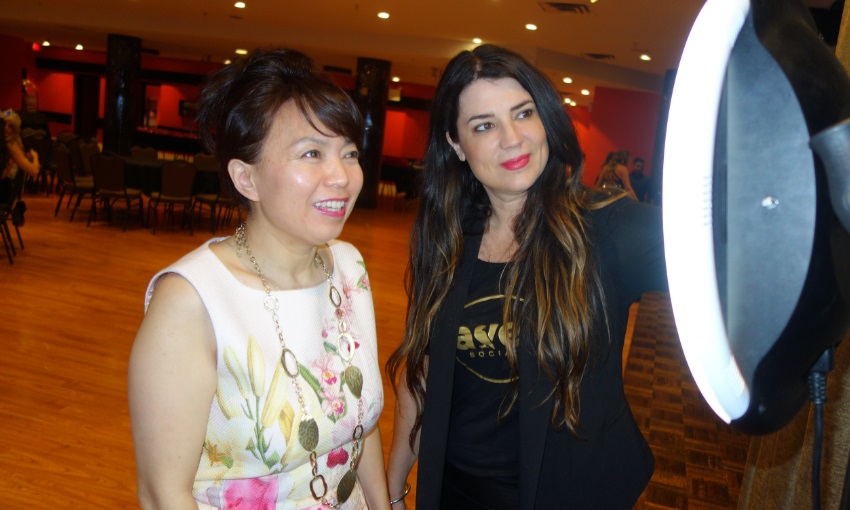 Raven Social event photo booth Robin Cimitruk was on hand in person to make Instagram videos of the affair. Her looping videos really impacted Instagram that night #MissWorldCanada and there’s talk of bringing her back next year and actually paying her rate, which almost never happens here in Beauty Pageant world. 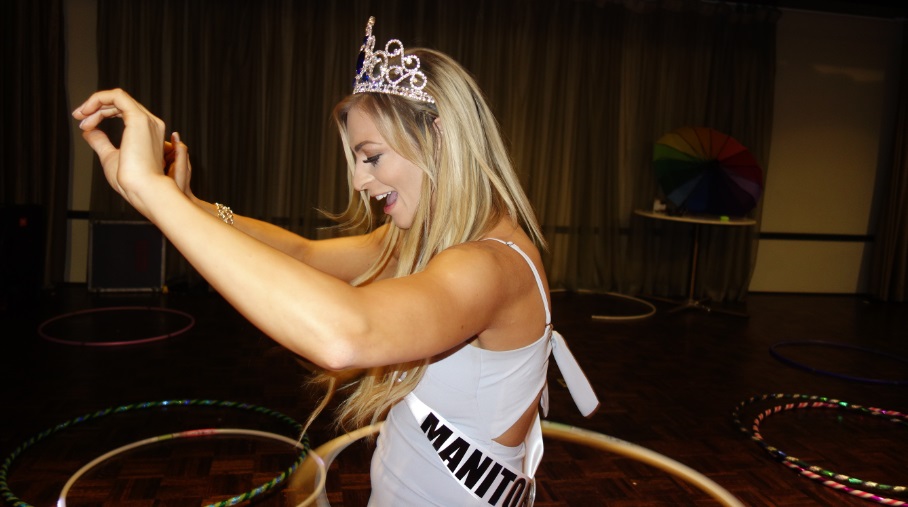 Isabella Hoops sent one of the Spin Starlets who also provided the audio.

Archer Dental gave every delegate a new toothbrush, paste and floss in a fancy paper bag that probably cost more to get made than the supplies therein. while the ladies from The Kraco gave up cosmetics and Street Chic fashion magazine teamed up with  Tastic marketing, a Mississauga advertising agency to cover the cost of making seventy five T shirts for the girls.

Nine West gave away dress shoes (heels) for the ladies.  This was probably the single largest donation in kind – sixty pairs of shoes is a huge donation to the cause. Lanalay cosmetics equipped every delegate with foundation and other makeup essentials. Sashes and Crowns and Pins and buttons were available on the first table. 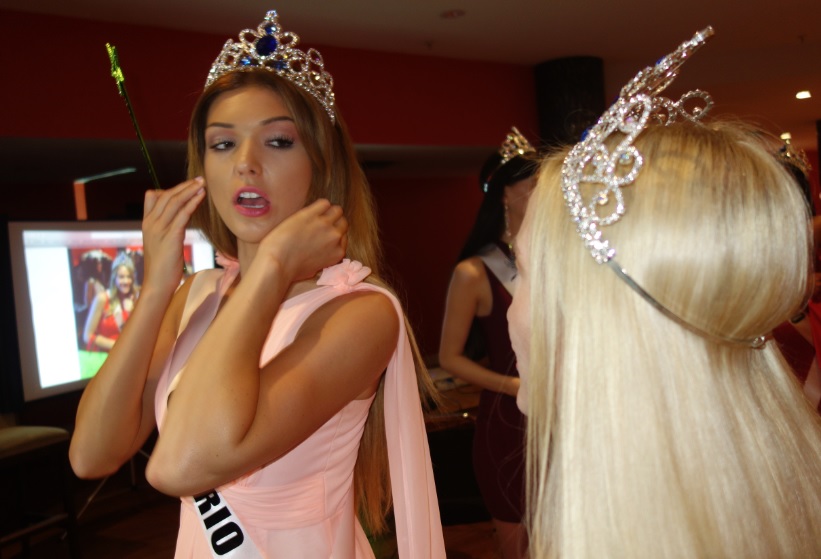 The green and blue solid colour shapes in the background of so many pictures of the evening are the microfiber Snappy Towels hanging on racks at their booth in the back. The entrepreneur who runs this organization gave away beach balls and let every delegate touch their microfiber products and thereby make a shareable moment center and get a bigger bang for their buck as challenge prize supplier throughout the week. 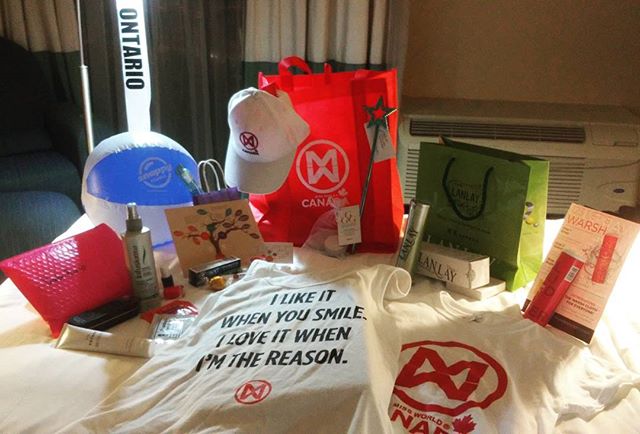 And then there was cake. The Sponsor party was written up by many of the delegates as per the Live Blog Assignment #3 instructions posted to the contestants earlier in the month. Here is Mattea’s post, Miss Calgary World described the 2017 Official Sponsor Party and won the social media prize for her coverage.

MONDAY – The next day was spent getting to know Sean Cuffey the dance choreographer and his team. Learning the required dance steps was taught in small groups while others were practicing walking or doing photo shoots with a myriad of professionals who fly-in from around the world for the opportunity of scouting the assembly for fresh faces and good bone structure. 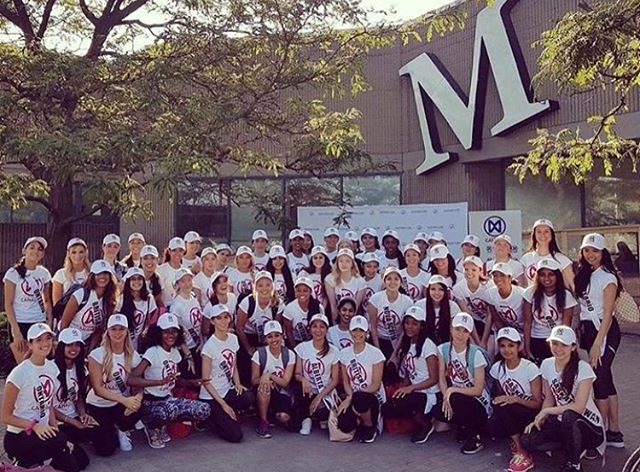 TUESDAY the 18th of July was Fitness Day and the entire assembly of Regional Delegates was transported in a giant coach bus to the most downtown Mayfair Clubs fitness gym where they were tested in a strenuous exercise regime. After the scores were entered and tabulated participants were invited to make a #SaltwaterSelfie video in the pool. You can read more details on this clever digital marketing strategy using Miss World Canada at KPDI blog.

Dan from Snappy Towels got this picture of Cynthia Menard in the pool which he posted on his site.

Read about the Saltwater Selfie shoot on Snappy Towels blog.

WEDNESDAY was very eventful, beginning with an interview on Breakfast Television followed by walk through Ripley’s Aquarium. The tour of the downtown core ended at lunch at Pier 6 (207 Queens Quay) where the assembly of Regional Delegates boarded a Mariposa Cruises ship for an hour long lunchtime tour of the Toronto harbour. 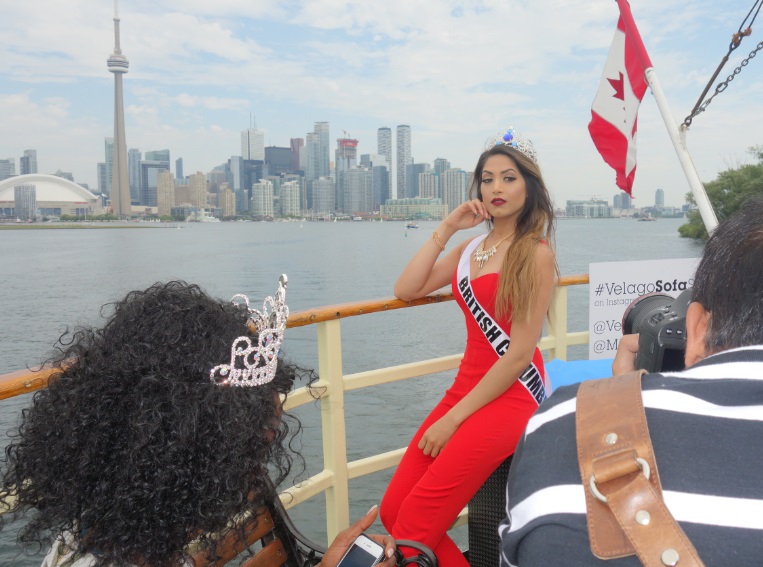 Velago Patio Furniture donated an outdoor sofa set to the delegate who could lens the best #VelagoSofaSelfie from its position on the top deck of the ship. It may sound silly but this was a very popular installation and a smart marketing initiative that has helped the Canadian patio furniture company make social media signals which are so important now in the modern Google search algorithm.  They weren’t the only ones on board, Spectacle optical stores sent along a suitcase full of designer lenses and an offer to give the expensive eyewear to girl who gets the most likes for a selfie wearing the sunglasses. Special thanks to  Cognition Toronto based video production company who came on-board the ship and then published this saucy little video afterwards,

THURSDAY was the 2017 Search for Miss World Canada Preliminaries at the Great Hall on Queen St W. 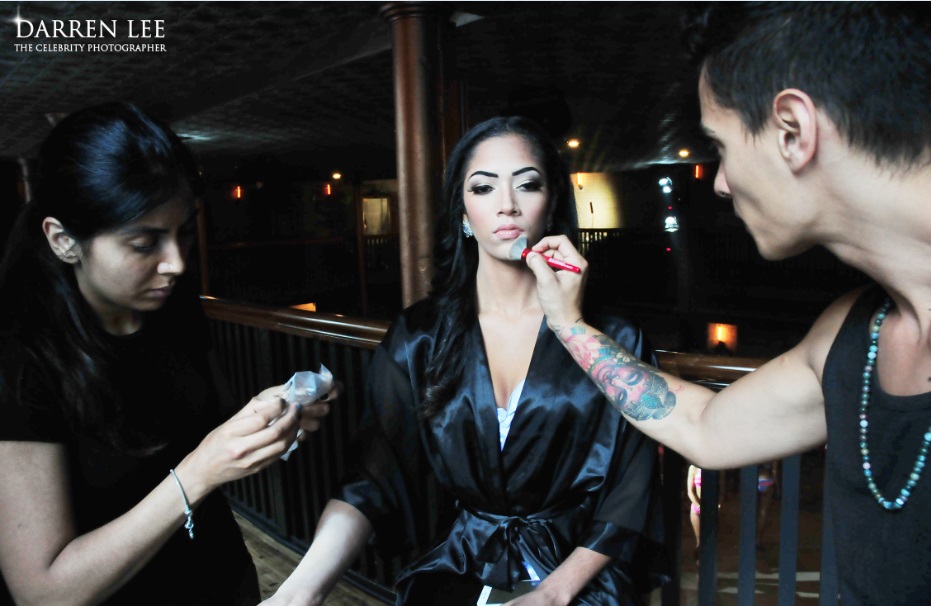 On this occasion the delegates got firsthand experience displaying themselves in various types of dress including evening wear and bikinis. And that practice would help calm their nerves for the next day’s events, which were set to be incredible. 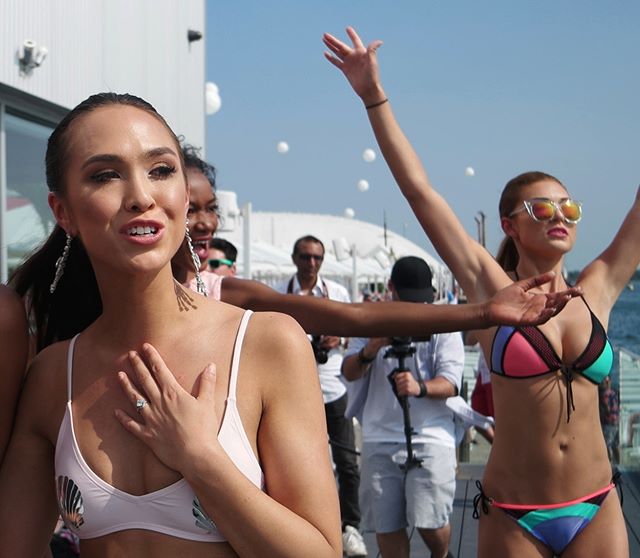 FRIDAY was amazing. On this day the delegates gathered at Cabana Pool Bar for a spectacular runway fashion show over the pool. The pageant people and staff at Cabana had built a bridge from the far end of the kidney shaped pool to the center island that would allow the entire area to watch a remarkable fashion show.

SATURDAY was the Grand Finale. 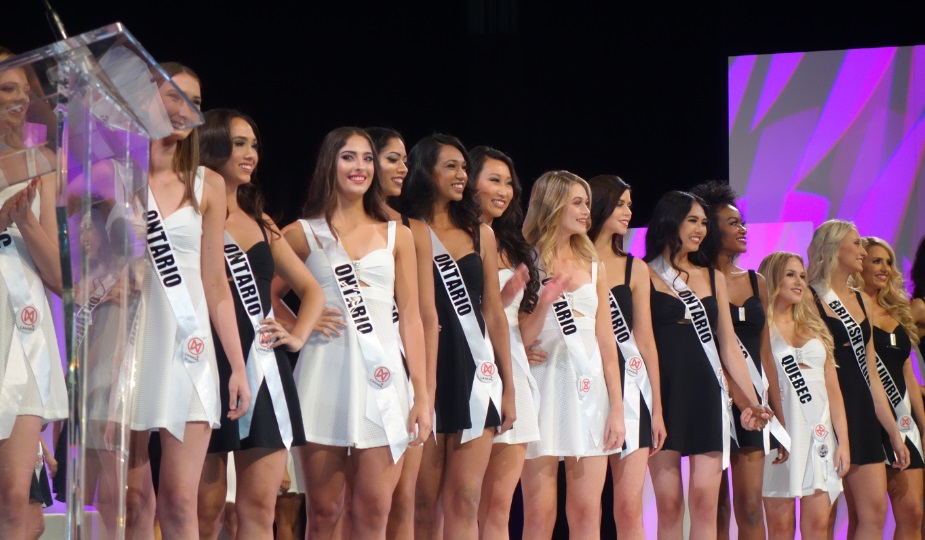 Saturday night was a very complex evening filled with dance numbers and human drama that was constantly heightened as the number of delegates steadily reduced. The competition narrowed from fifty six delegates to twenty almost immediately and that group quickly became fifteen which became six and finally,  the winner was announced.

Against stiff competition from so many other remarkable candidates. 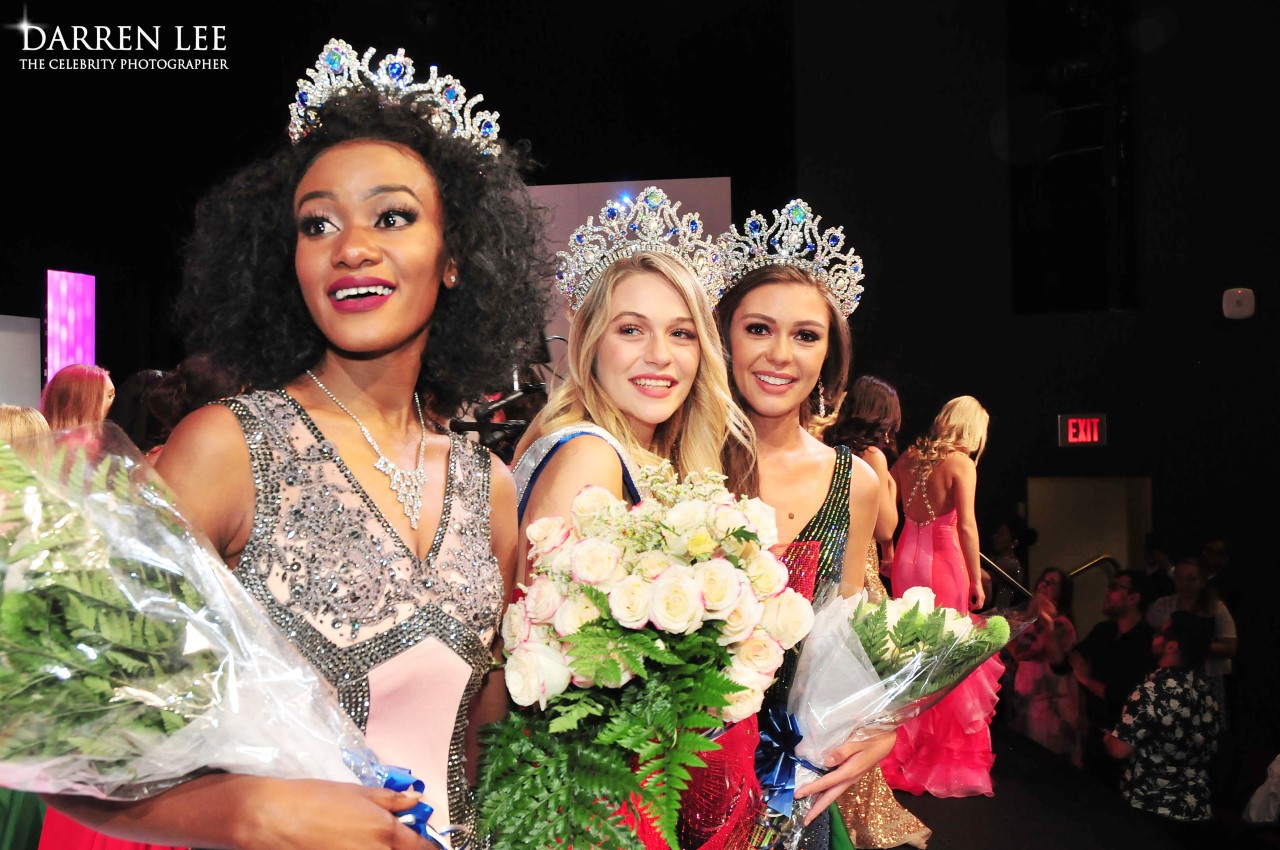 After the crowning there was a line-up for photos with the new princesses.

SATURDAY night, hours later there was a wicked after-party at Rebel nightclub on Polson Ave in the Portlands. Miss World Canada blogged the After-Party at REBEL. 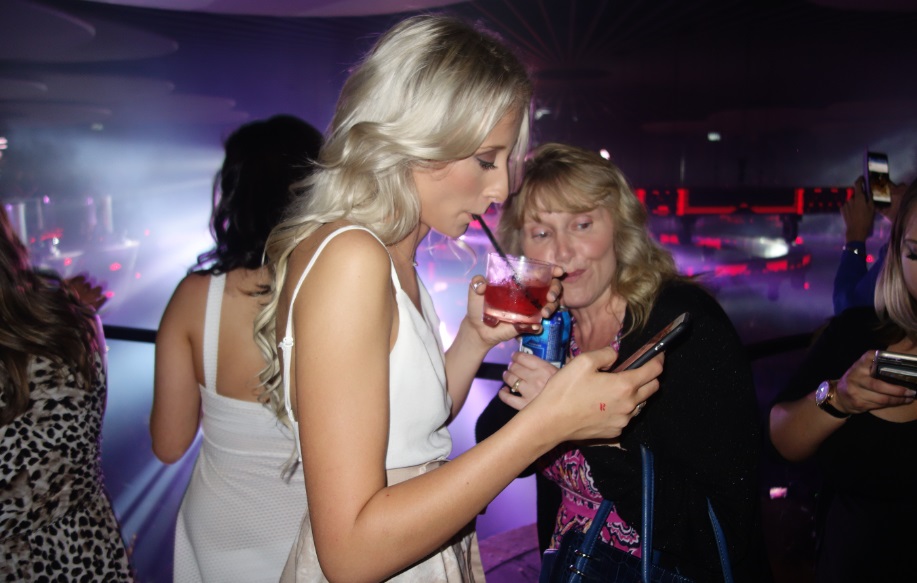 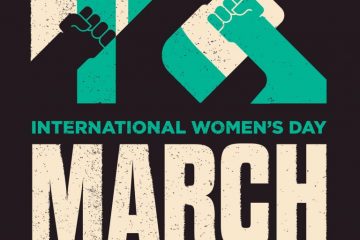