Stand Up Paddleboarding Through Toronto Islands at Night

Imagine going sightseeing at night? That’s the experience Toronto Island SUP offers with their ‘Night SUP’ packages on select evenings in the summertime.  Sharing Toronto magazine was fortunate enough to be invited along, and did join-in a group paddle that happened there on Tuesday August 8th 2017.  Toronto Island SUP had just reappeared again, open for business after severe flooding in late June – July; it had taken weeks for the ground to dry up enough before these parks and streets could be re-opened to the public.  Some of the islands were still off-limits, by land.

Above is the wide shot of our Stand-Up Paddleboard Instructors getting everyone strapped in and perfectly equipped for the marine escapade through the Toronto Island’s ecosystem. 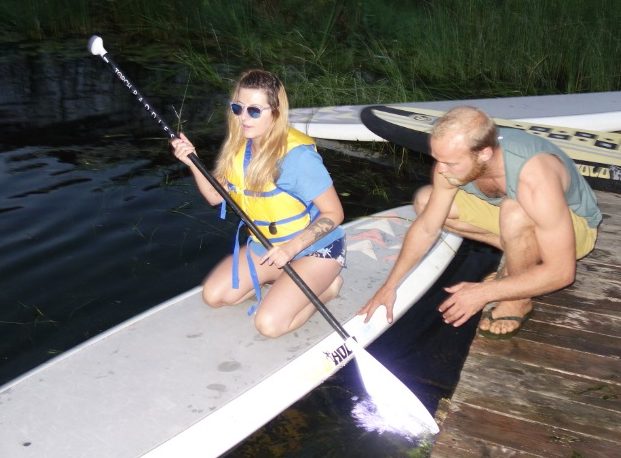 The three-person team from Toronto Island SUP was very professional and gave the group an overall float plan before we embarked on our evening voyage.  Everyone was super excited to be sure, but remember at this point we had already been traveling for some time. This author traveled with Raymi Toronto who loves Torch SUP, and we’d met other authors waiting at the harbour terminal where we all secured passage on the correct harbour ferry boat to get to the Toronto Island. Once here, our group walked west on Cibola Ave until we found the Algonquin bridge. Only after all that happened could we relax and explore Toronto Island  marine channels at night while Torch Paddleboarding with Toronto Island SUP tour guides Jana Ruby, James Statham and Niv Froehlich.

Torch SUP or what the company calls Night SUP is more active than a scenic boat cruise could ever hope to be, as participants can paddle wherever they desire and be more alone or more in company than when seated on a boat. This escapade is a brilliantly buoyant sightseeing experience that’s best enjoyed atop wide foam boards. Toronto Island SUP provides all equipment including boards that don’t hurt the bottoms of your bare feet as some of the other ‘textured’ boards on the market. 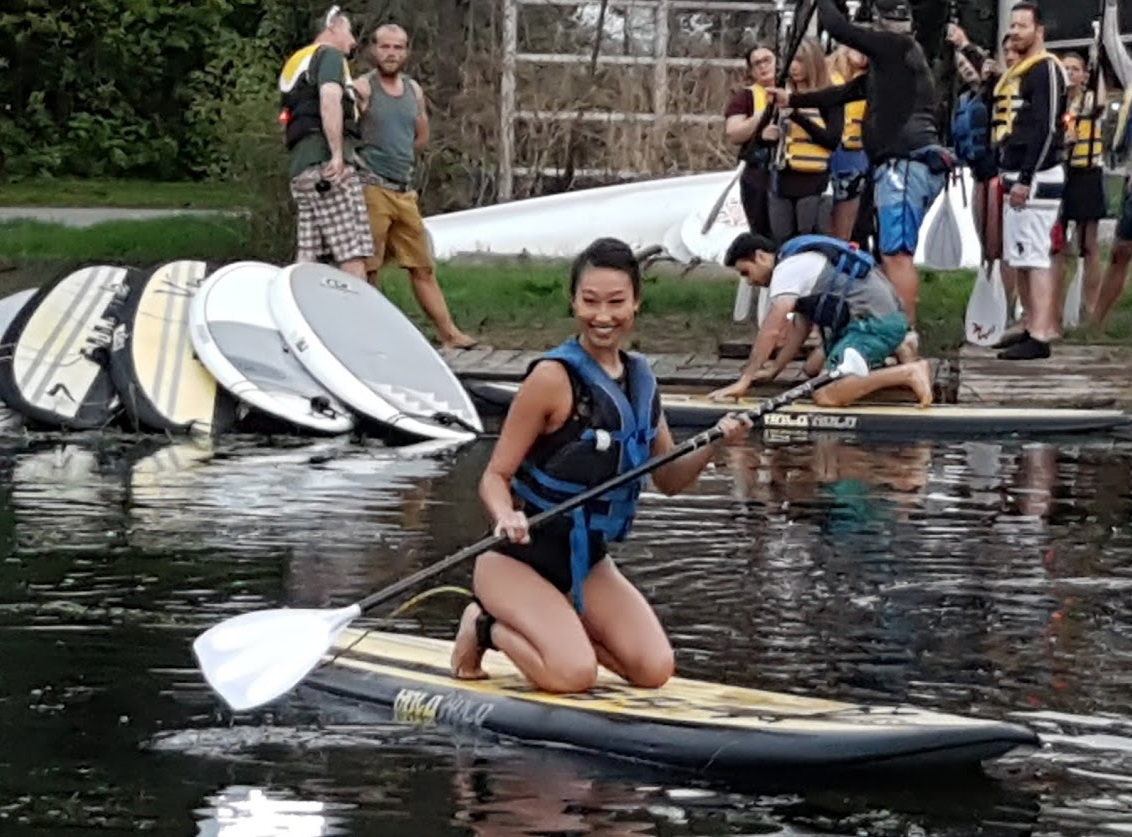 All twenty participants were each issued either blue or yellow life jackets and the nifty LED glow-in-the-dark paddles. I believe the life jackets are colour coded with blue being expert, and yellow denoting novice, but as this author was issued a yellow vest and can now see in the pictures that Alice Li 2017 Miss World Toronto who also joined our sightseeing party that evening, had a blue vest, perhaps there was a colour coded PFD sub-routine at work.

The much anticipated voyage was presented to us as guided night tour through the calm, sheltered waterways of the Toronto Islands. Our guides had assured us we would all see some local wildlife and the effects of the recent bad weather on the marine ecosystem.

August 8th 2017 – Toronto Island Torch SUP was set to cross through an area of our beloved city which was among the most heavily flooded in the heavy summer rainstorms of 2017.  The tour was organized to visit the most heavily damaged areas and there discuss the most devastating effects of the flooding and how it has impacted the islands (as mentioned earlier some areas were still off-limits). Sections of Centre Island, where the amusement park is located had been shut down for a month and only just re-opened the week before. Other popular destinations like Olympic Island, Gibraltar Point were still closed. 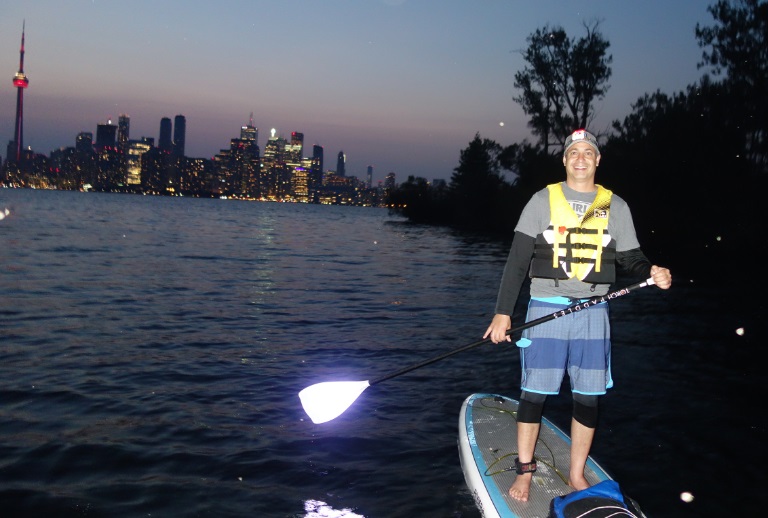 Toronto Island Park has been closed to the public since early May, when heavy rainfall caused widespread flooding in what the City of Toronto labelled as a once-in-a hundred year event (avoiding without expressly denying the increasing frequency and severity of weather related events and links to Climate Change). The Toronto Island’s recovery was further hampered by sustained wet weather which meant the water levels on Lake Ontario receded much slower than expected. Niv said all the local businesses were missing out on many thousand visitors a day and its for that reason City Council voted to stop collecting rents, and fees from island residents and license holders. This means the city misses a big share of its much needed summer tourism monies, and we don’t need to invite David Suzuki along on our SUP adventure to tell us that’s a perfect example of the true cost of Climate Change on the Canadian economy.

The Weather Was Perfect for Stand-Up Paddleboarding

June, July and August 2017 will go down in the record books as being one of Ontario’s coldest and wettest summers ever, which also means it was the worst years in recent history to be in the business of vending outdoor fun on the Toronto lake shore.  On this night however, the warm humid weather was absolutely perfect for our travel adventure, and just as Niv had predicted, the sunset was stunning.

Behold we did some scenic SUP sunset photos in the sweet spot at the mouth of the central channel through the islands. 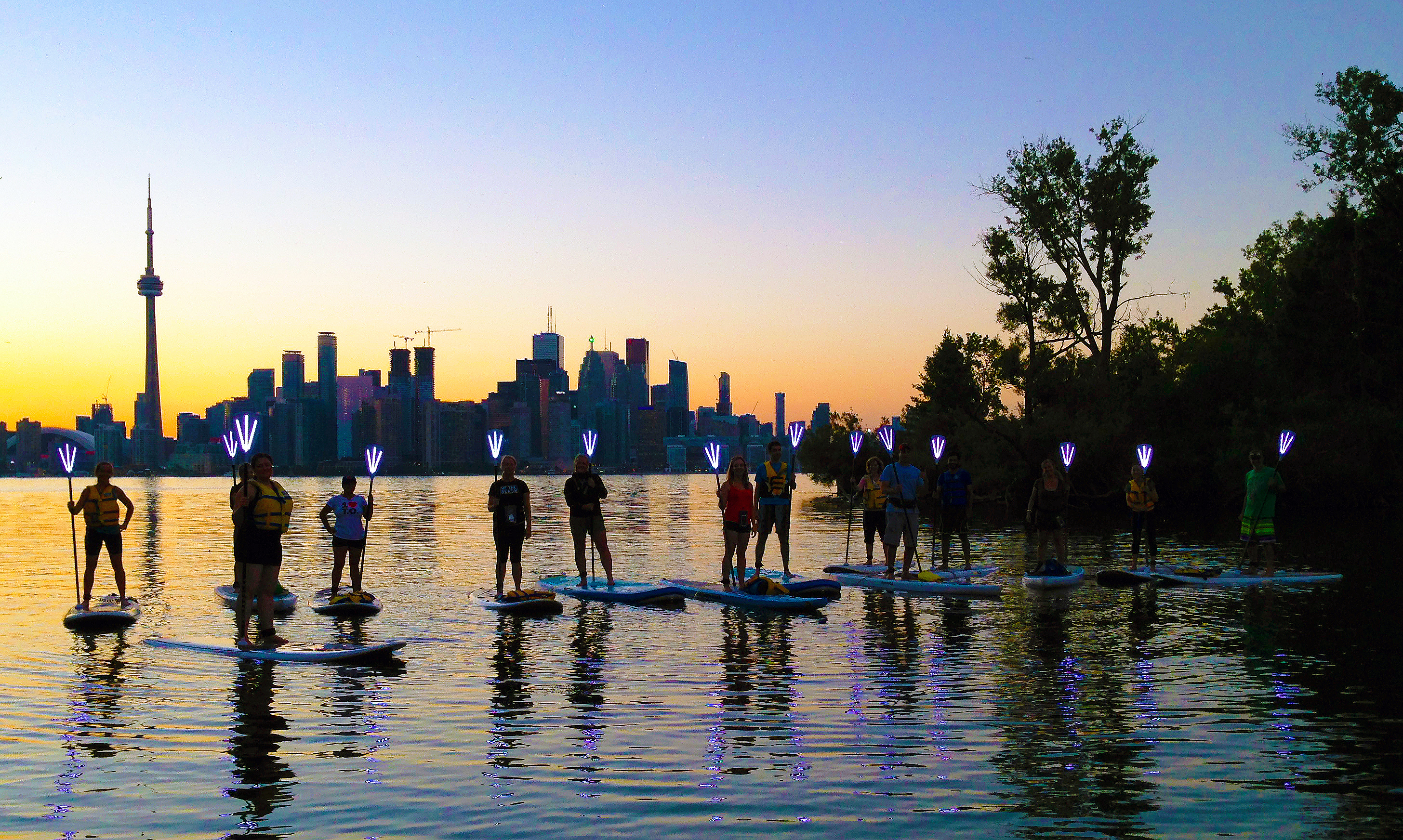 The group photo we captured that night is so good the company now uses it in their own online marketing. 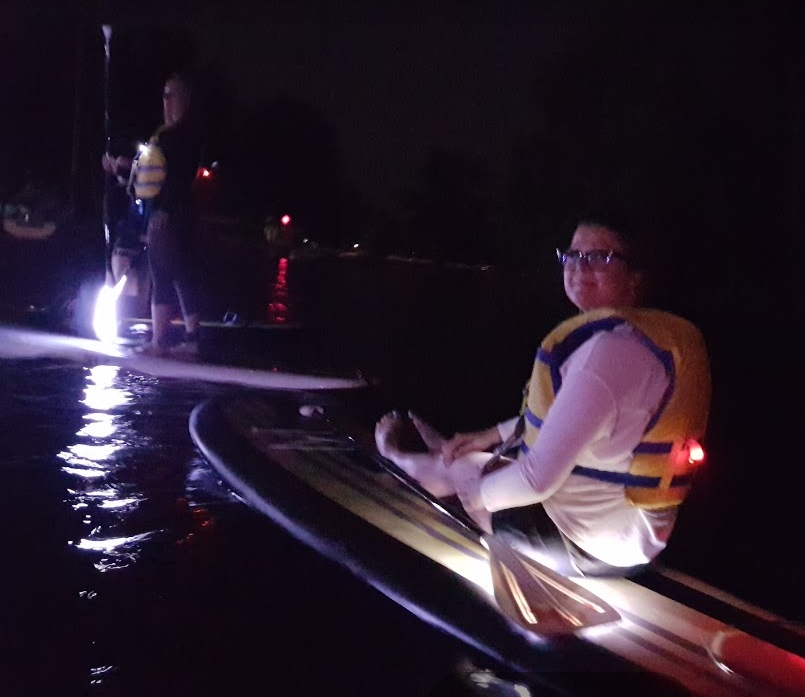 In case you’re curious, the activity we call Stand-up Paddleboarding today started in Waikiki Hawaii about fifty years ago when the local beach boys started standing on their long surfboards and using outrigger paddles to venture out farther on the ocean for a better view of the incoming surf.

The competitive sport of Stand-Up Paddleboarding, and yes there is such a thing, didn’t take off until the early 2000s. Today there are long distance SUP marathons and speed races and even night SUP obstacle course competitions.

Our group’s evening exercise started in the calm waters of the central channel but at one point we did venture out into the big swells of the harbour itself. That was where this author had the most trouble but managed to keep afloat.  All participants used their training to master their balance on the boards and later in the small streams we had to practice squatting, kneeling and crouching under tree branches!  There were a few magic moments were nobody was talking and we all just ghosting through the marine channel’s serene moonlight trees and marshy glades. 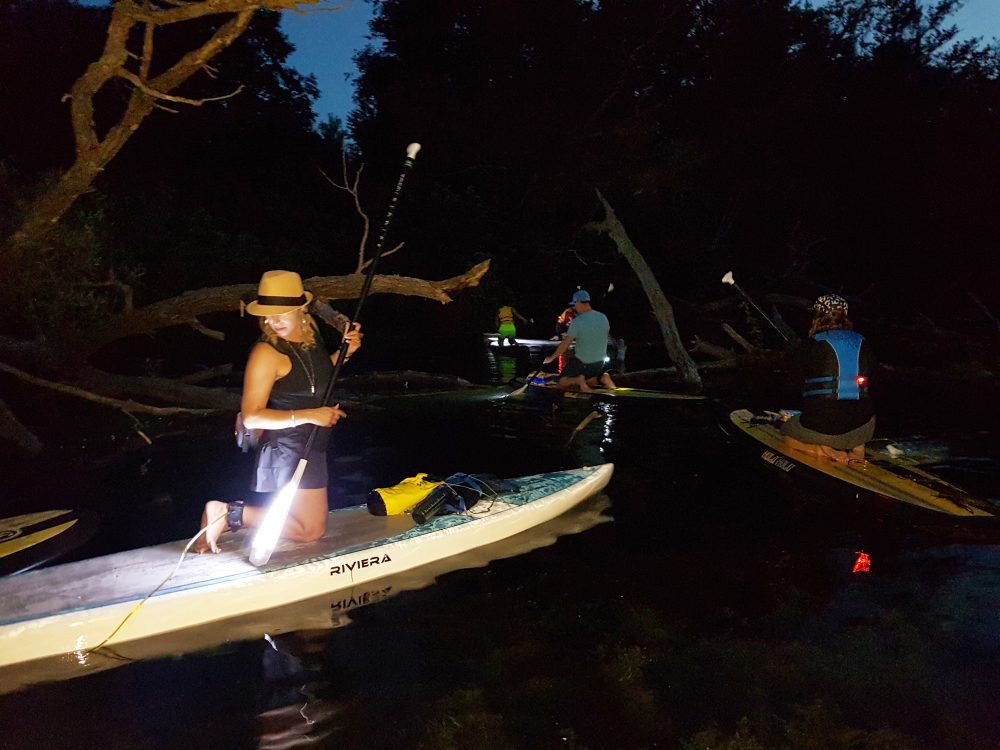 The Toronto Islands is an archipelago made by a combination of dump trucks and Divine wraith. It was once a long continuous sandbar but severe summer storms in the 1800s and early 1900s transformed the terrain into islands.  The beautiful aquatic abode is home to many rare birds, fish, amphibian and mammal species and some of which can only be seen at night. Bats, raccoons and burrowing owls are some of the animals that were glimpsed by sharp eyed members of the group. 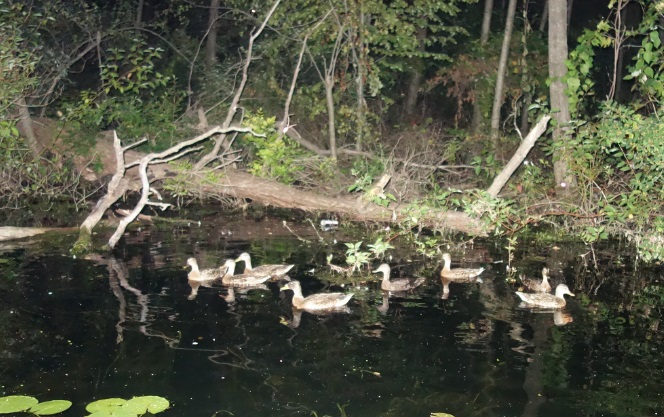 After the sunset photo shoot and the inter-harbor haul we paddled through small streams and swampy lagoons for another forty minutes.  The group encountered a very large sleeping turtle (or was it dead?), and we heard plenty of crickets and frogs. We floated alongside lots of brown ducks which came up close to our boards looking for food.

Around the bend and after an exhausting paddle through the channel we came upon the RYC  complex and its many million dollar yachts. From there we started our journey back through the center channel. We paddled under old wooden bridges where there was very little headroom due to the high water levels.  We navigated our boards down canals littered with debris from the flood, and without having to look too hard, we occasionally glimpsed breathtaking views of the City of Toronto all lit up at night.

Because we were ‘outstanding’ on the water for ninety minutes, the end came as a relief to everyone; paddleboarding is a full body workout and ninety minutes of sustained exercise was a little excessive for more than one entrant. The main muscle groups being worked are your mid back muscles, shoulders, arms and abs. This author found his ankles and lower calves were getting sore (and kneeling on the board bothered my feet and ankles even more – standing up was the most comfortable position). In the future this author will bring a light jacket and canvas shoes (and some bread crumbs to feed the ducks but that’s our secret). 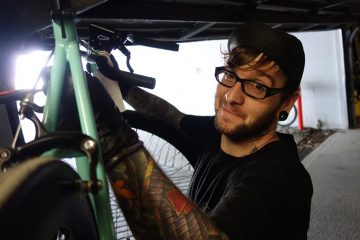 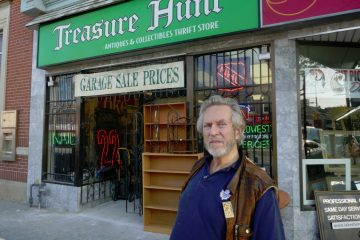