Most people don’t realize that rock climbing is a competitive sport, and that’s because it gets no press. The general public believes rock climbers are just out to challenge themselves, conquer mountains, and rise above their own limitations.  That’s all they’ve ever seen on TV.  Unlike golf, tennis or cycling, competitive climbing is still in its infancy. But behold, the sport is emerging with a roster of internationally recognized athletes, corporate sponsors and legendary routes.  Today only a few people know about competitive climbing, but tomorrow this will be a prime time TV sport and the World’s best climbers will be household names.

Competitive Rock Climbing is a real thing now, and there are speed climbing competitions popping-up all over North America.  Sport climbing is scheduled to make its Olympic debut at the 2020 Summer Olympics in Tokyo, Japan. 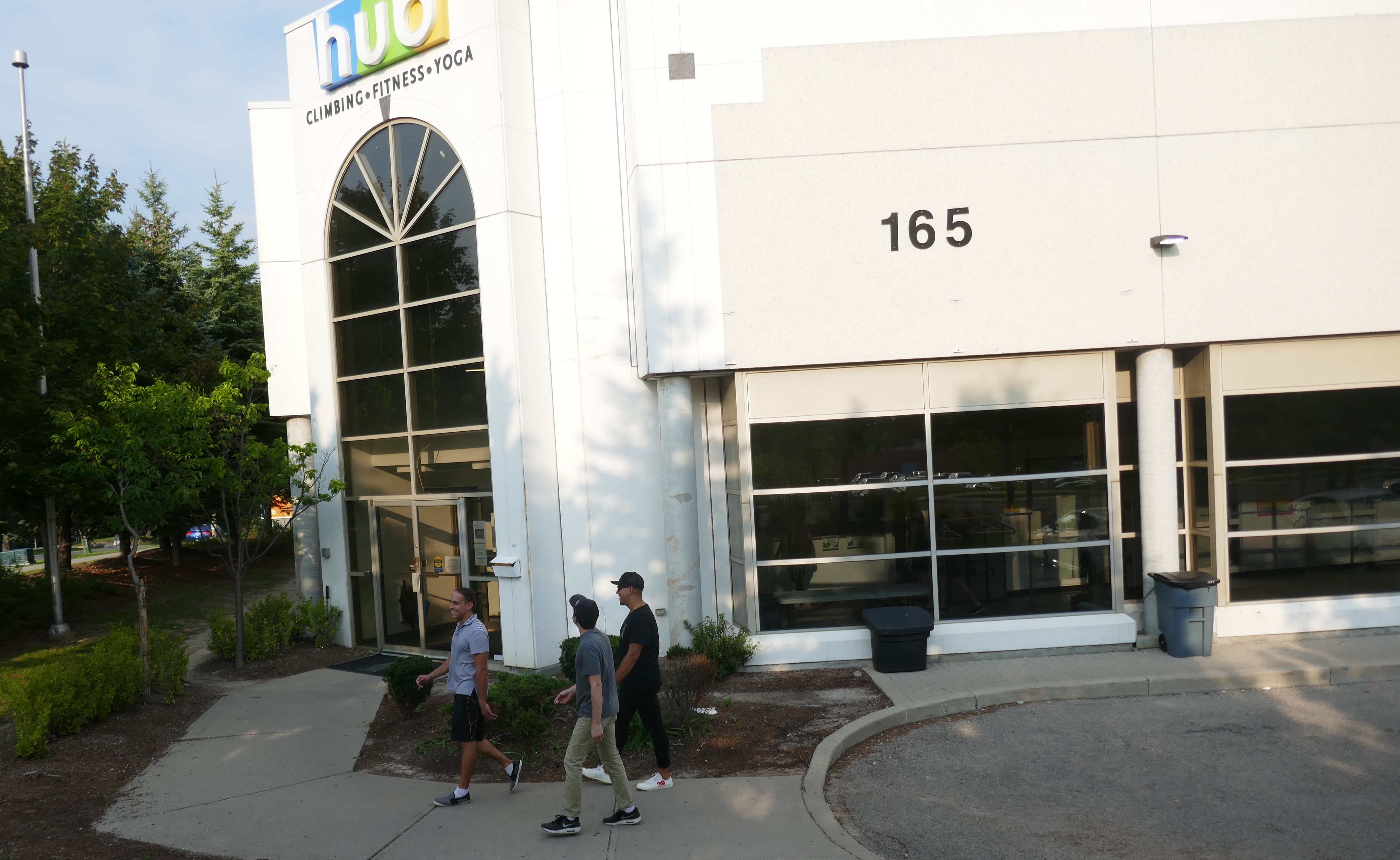 Climbers living in the City of Toronto require rock climbing gyms to hone their abilities, and there’s lots of good choices inside our great city, including Arch Angels, Boulders, and Joe Rockheads. But some of the best and most competitive indoor rock climbing happens outside the city.  Hub Climbing and Bouldering in Markham is a mountain of fun, and this facility also has rock climbing competitions and Speed Climbing Walls set up in the gym.

Group climbing experiences at Hub always begin with some limbering exercises, squats and stretches. Below you can see Casie Stewart, Martin Dasko and Steven Branco author at View the Vibe which published The Rising Popularity of Indoor Rock Climbing Gyms, and Joel Levy, editor of Toronto Guardian. 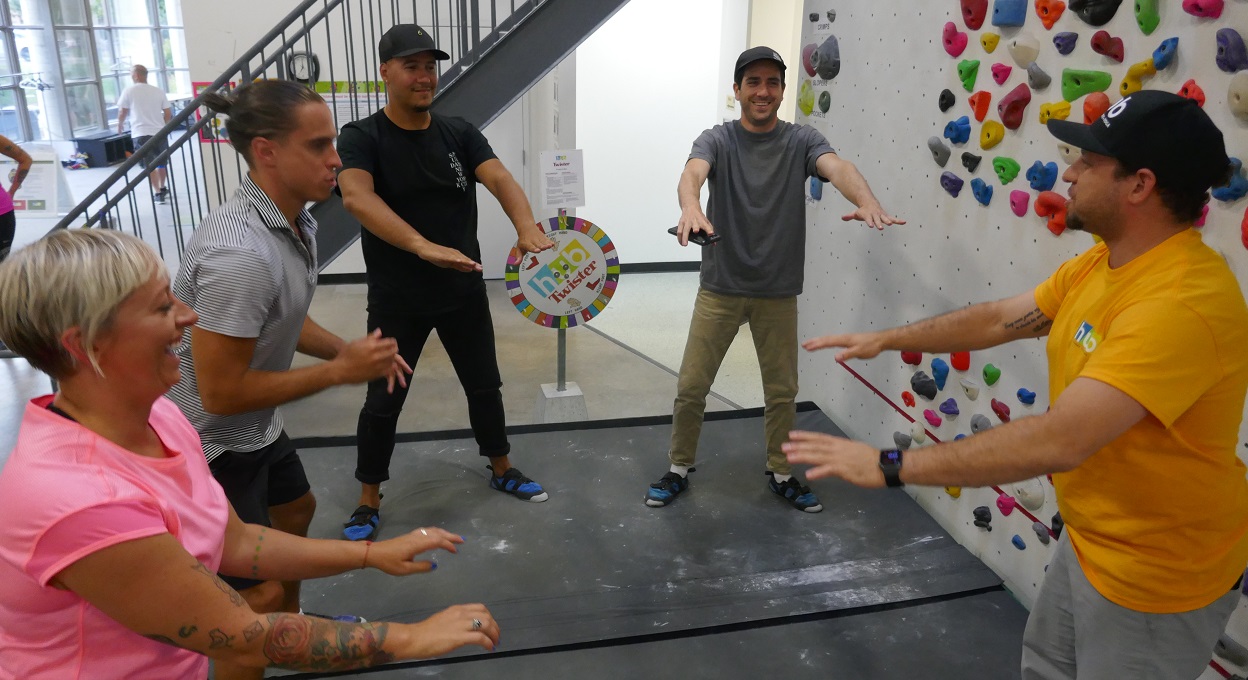 The stretches are followed by a brief introduction to Top Rope Climbing and how-to clip into the autobelayer’s safety line which runs down the length of the wall and is taut.  If climbers accidentally let go of the rope, it will go whipping up the wall and have to be retracted by the climbing instructor.

The primary focus of this one-and-only lesson is to teach climbers how to clip their own harness belts into the taut safety rope that stretches up the wall, and how to properly fall down and away from the wall when descending. 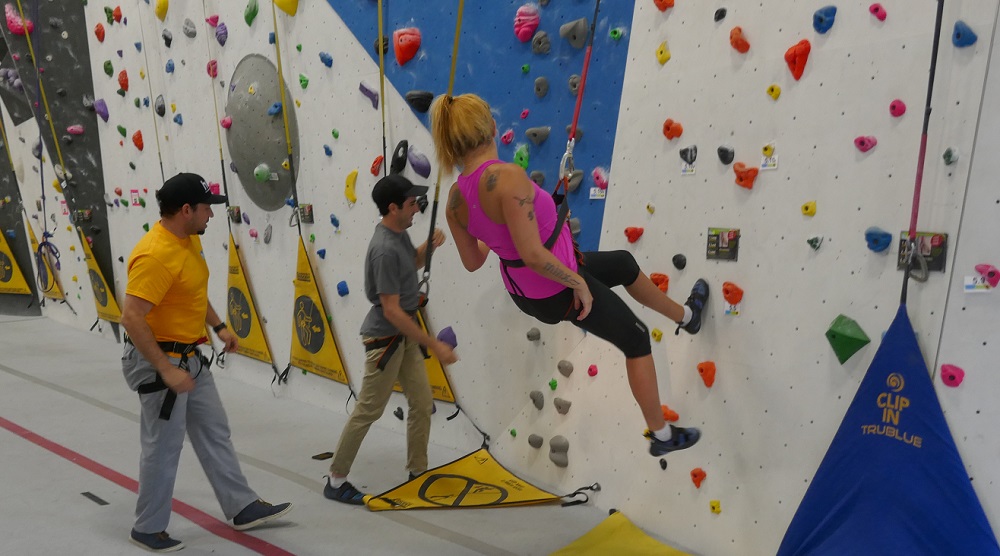 Lead Climbing is what they call the practice of leading climbers or otherwise making a route where there is no rope dangling from the top to help.  Lead climbing happens when one man or woman goes first to leave the rope for others.  This involves the climber attaching themselves to a length of rope and ascending a route while periodically securing bolts to hold the safety rope to the face of the route, and clipping in for his or her own safety.  The descent rope starts followers at the bottom of the route, but that’s not usually part of the competition unless its a team climb.

Speed Climbing can either be an individual or team event, with the person or team racing clocks to climb a standardized route; the fastest climber up the course is the winner and there is no arguing with the score when the climber himself has to push the button at the top of the wall to stop the clock.

Speed climbing walls appear similar to other climbs at the gym except there’s a tiny foot peddle at the base of the wall and a digital clock with a glowing yellow button at the top. When the climber releases their foot from the peddle and begins their ascent, the clock above begins counting-up their time and will only stop when the climber punches the button and locks in their score. 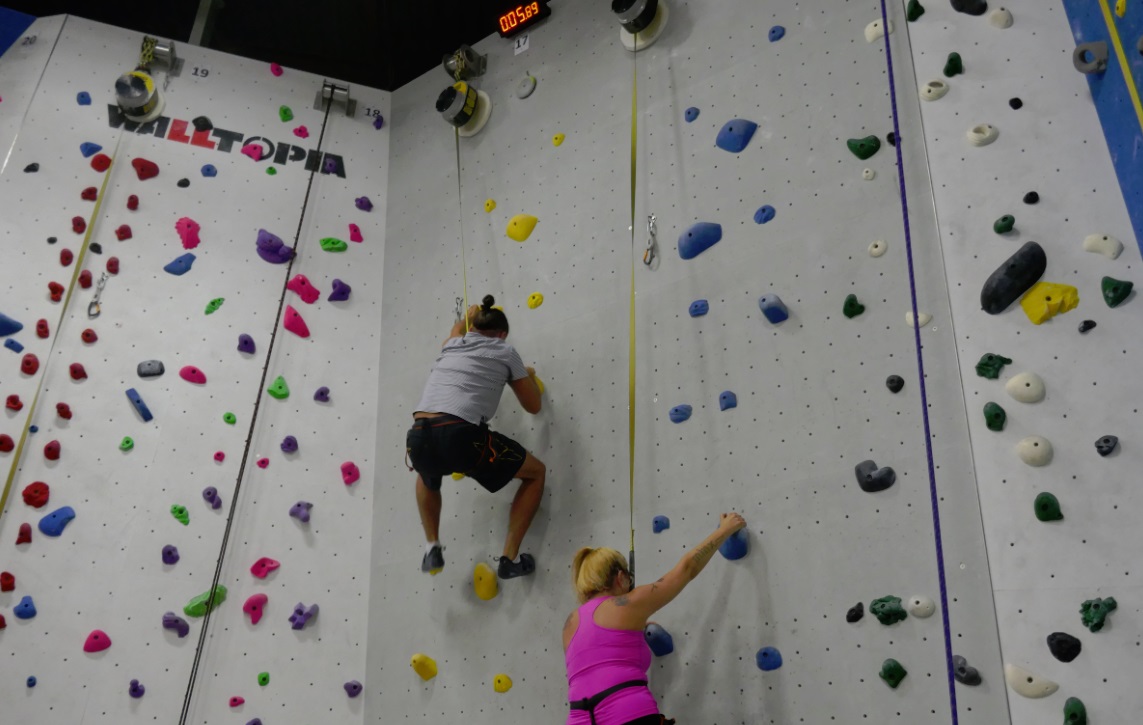 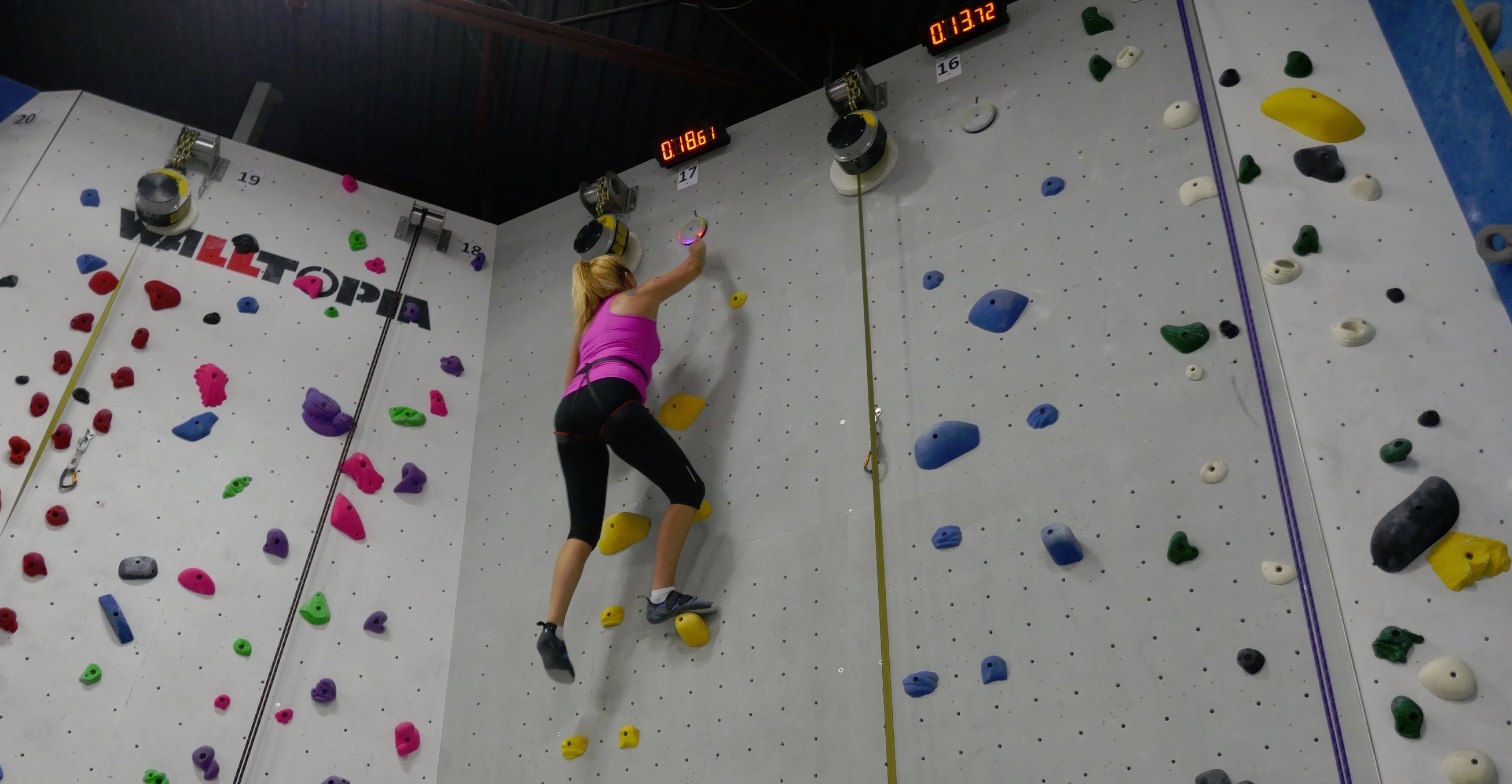 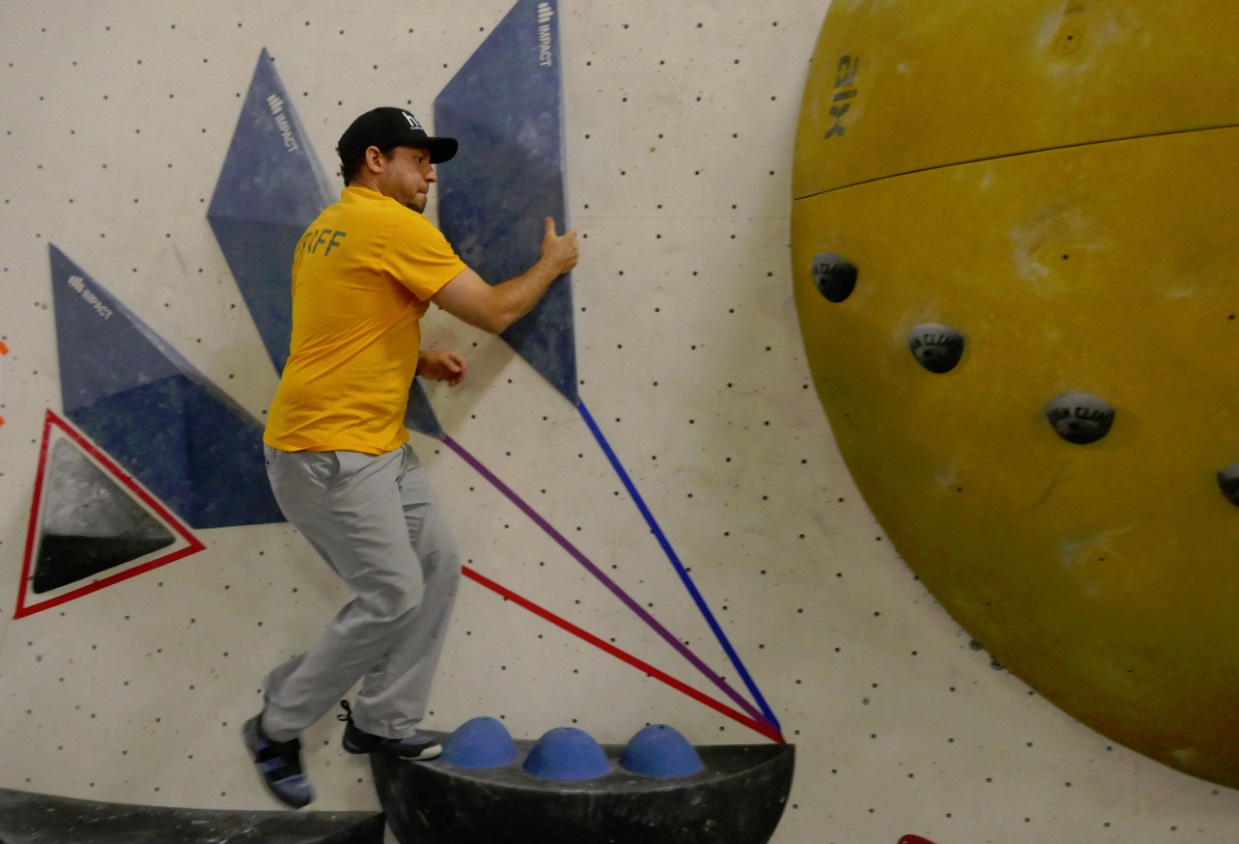 Casie Stewart blogged her rock climbing adventure on her site.  Below, Casie and Joel Levy at Hub Climbing on 15 August 2018. 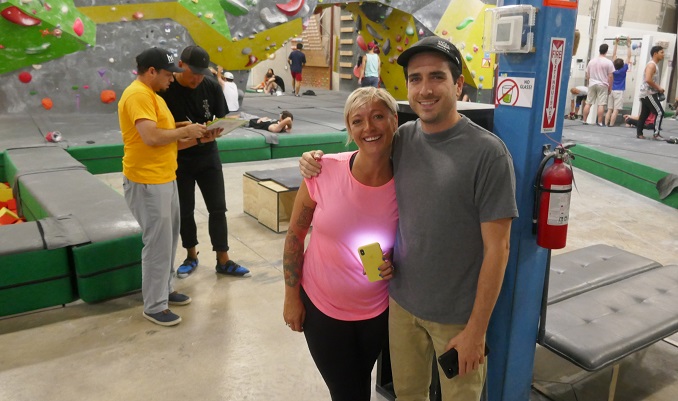 Rock climbing is a demanding sport that requires an athlete’s mental focus be combined with their physical strength and dexterity.  Indoor climbing gyms are essential for the right type of training.  The world’s best climbers still frequent indoor climbing gyms because its the best place to condition their bodies and work exactly the right muscle groups to tackle the toughest real life routes in the wilderness.  These people come to gyms like this because they know they’ve got to trust their bodies when they’re hanging off a mountain, hundreds of meters above the ground, by just their finger tips.